Cheers to the East Village couple who got married at McSorley's 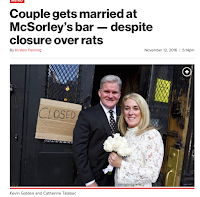 McSorley's is currently closed by order of the DOH. However, that didn't stop an East Village couple from still getting married inside the bar as planned on Friday.

East Village residents Kevin Golden, 44, and Catherine Talabac, 52, had been planning their big day since March. “McSorley’s is just one of my favorite places. I live two blocks away, and I always gravitate here,” said Talabac. “I asked if they do weddings there and they said no. But when I asked if we could, they said ‘ f – – k yeah.’ ”

“Some girls dream about the Plaza,” she said. “That wasn’t me.”

McSorley's can't serve any beer at the moment. So! "[T]he party moved over to the nearby Copper Still for a drink afterward." (And the dinner party was next door on Seventh Street at Porsena.)

Bartender/McSorley's historian Shane Buggy thought it was the first time a wedding ceremony had taken place inside the 162-year-old bar on Seventh Street.

“We’ve had plenty of proposals, but I can’t ever recall an actual ceremony,” he told the Post.
Posted by Grieve at 11:35 AM

Great guy! I was in Copper Still on Friday and he was kind enough to share a glass of Yellow Spot with my Brother and I. Congrats Kevin!