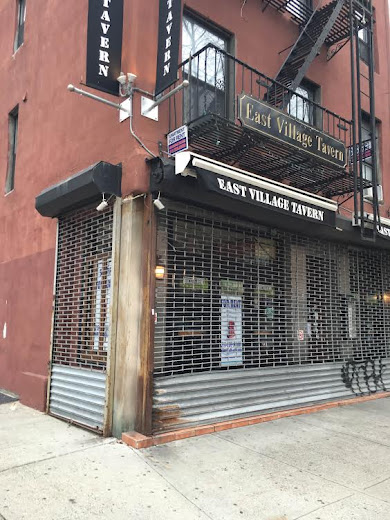 As we first reported, East Village Tavern closed after service on Sunday evening.

Management of the corner bar on 10th Street and Avenue C left this message on Facebook last Saturday: "It is with a heavy heart that we regret to announce that do to a disagreement with our landlord, the East Village Tavern will be closing..."

Steve Croman, who was arrested back in May on 20 felony counts, is the building's landlord. Eviction proceedings happened here earlier this week when the Marshal came calling... 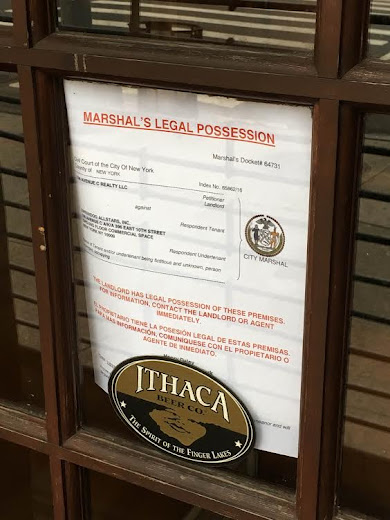 A rep for Croman's 9300 Realty told this to The Real Deal:

"We are sad to see a long standing tenant close its doors, but unfortunately the business has been unable to consistently pay its rent in the last 12 months. We have made several attempts to strike a deal to settle the debt however given there has been no effort to make payment on the more than $78,000 that is owed, we were forced to part ways with our tenant."

You can only wonder what else went delinquent. Employee wage payments, vendors probably a long list. Owner knew for two weeks the place was going to be taken by Marshall's then two days before sends a mass text to employees of closing. A real display of regard for others loyalty to employees less then zero. Long run they are better off here you could count on one thing the short end of the stick.

Why isn't Croman in jail yet?

Croman not in jail yet...perhaps because he has not been tried and convicted funny how that works.

East Village Tavern went to court 4 times (public records) and won each time when Croman found a loophole to demand all its taxes up front rather than quarterly.

The 5th time, however, they found in favor of Croman. Who the hell knows why?

Anyone thinking of renting here better think twice: Croman is heading for prison; is that the kind of landlord you want?

Croman, Icon and the rest of the scum will begin to take notice if there is a organized BOYCOTT of the businesses they rent to.

Croman and Terrance Lowenberg need to gut renovate a prison cell together for the pain they have caused.

I can not help to think this spot will be vacant for a long time. Besides the Landlord issues the physical plant needs heavy renovation to make it as a Neighborhood Bar...I can not see a new owner getting a license for anything beyond beer and wine. There is a lot of empty property down here with no real demand. The Big winner here is across the Street Royale.