Get smart at this new cafe on Lafayette 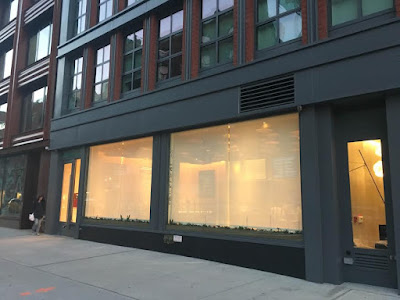 Back in July, we noted that a café/coffee shop was in the works for 372 Lafayette St. called Honeybrains. At the time, there wasn't much info available about the concept.

Here's more about Honeybrains, opening this week here between Bond and Great Jones, via their website:

Honeybrains was sparked by a conversation between three siblings, which evolved into a deeper exploration of the relationship between ingredients, health, and flavor. One of the siblings is a neurologist who has spent years studying how nutrition and lifestyle affect brain function. His research became a focal point of their discussion.

Ultimately, this conversation led to the creation of new recipes, and a new experience, with the well-being of people at their core. Together, they started Honeybrains to translate the most reliable, collective scientific knowledge about brain health – which is intimately related to body health – into enjoyable foods, drinks, and experiences.

Dr. Alon Seifan, who co-owns the café with siblings Galit and Tomer, worked as an assistant professor at Weill Cornell Medicine’s neurology facility, according to a Honeybrains feature in the Post yesterday.

Among other things, the 35-seat grab-and-go-style café features a HoneyBar (raw honey) as well as breakfast offerings such as
power oatmeal with quinoa, spiced coconut milk and manuka honey and a variety of toasts, including kale crunch and avocado smash.

You can find the rest of the menu here.
Posted by Grieve at 4:00 AM

Good idea but an awful name.

The effort to seek healthy food, improve the eating habits of Americans, etc is important and necessary - but just wondering if there will ever be any concern or thought to improving the health and the lives of the folks who do the back-breaking work to supply our food like farm workers or kitchen staff?

Any chance of anyone opening a cool restaurant to spread and support that?

YAWN...How come none of us had any such deep intellectual thoughts till these youngsters came along?

"Brain wellness" is just another gimmick to sell simple ingredients at a high profit to people that find themselves all too fragile and important. Sorry but what a load of bullshit. Their mission statement reads like a corporate version of a hippy organic cafe, at least they left of the words "toxins" and "cure all".

Finally a place where I can get toast.

Wealthy people who need to diversity their income for tax purposes. Save us from people like this. I wish everyone who posts their raison d'etre would stop assuming that they are doing this to improve the lives and health of their customers--that if only people followed their advice on what to eat and how to eat it (when I went to camp we were told to chew our food 32 times) they would lead healthy lives. Just serve good food at reasonable prices. These facebook pronouncements (or wherever they are posted) are professionally written--and this one sure sounds it.

No donuts I guess.. Just asking.

@ 7:55 AM
Whaa? Are you saying that "improve the eating habits of Americans" does not improve the lives of farmers and food preparers? Or are you just stretching for something to whine about?

It's people like this who make me want to eat McDonald's again.

The amount of comments before tasting the food is comical. I actually like the name, its descriptive and unique. Menu looks solid, now its just a matter of the food quality!

Open your minds, people (no pun intended). This is an independent business and as a community we should support it at least in spirit unless it proves otherwise. So what if it is targeting people who may be in a higher income bracket than you.