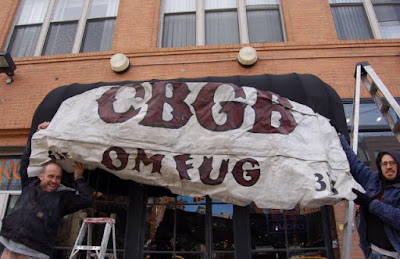 And where are they now? The most recent awning is at the Rock and Roll Hall Of Fame Museum in Cleveland. The original awning was allegedly in the possession of JFA (Jodie Foster's Army), who may have borrowed it after a show in the mid 1980s. And the third awning has been with East Village resident Drew Bushong since 2004.

I asked Bushong, a former CBGB employee, about the awning and how it came to live in a box under his bed... and why he's selling it now.

How did you come into possession of the awning?

Totally randomly. I was walking home from Mars Bar on a sweaty night in 2004 and saw a cardboard box that was very familiar. It had sat above my desk for a year. I heard later it was just waiting for postage stamps to get to Cleveland's Rock and Roll Hall of Fame but was tossed out with a bunch of other crap in a cleaning rage.

So I saw it sticking half out of the trash in front of the club, and just threw it over my shoulder. I didn't really lose my shit about it until the next day when I woke up in bed next to it, torn open with the awning peeking out of it. Was quite an exciting hangover.

How do you know that it’s the real deal?

There's no doubt it's real. In my research, it's one of only three awnings that hung there. It went up as a replacement after punk rockers JFA are rumored to have stolen the first one.

It's a bit of a mess with paint splotches over some tags and it stinks a bit. It's been under my bed mostly since I found it.

Why are you selling it?

I had a beautiful baby girl, Thorn, 3-and-a-half-weeks ago and could use the space and money in better ways now. Dad ways now. Life's pretty exciting.

How long did you work at CBGB?

I worked as a door guy/security starting in late 2000 and was just working a couple shifts a week here and there. I had been there a few months and was getting pretty good at it. One boring night I ended up stopping a fight from happening and got stabbed in the neck in the process. I held the knifer down, under this awning actually, and called [owner] Hilly [Kristal] before calling the cops. I guess I handled the fight pretty well as I was promoted to management pretty soon after.

I have to say it was the best job I'll ever have. Best crew of people and employees and some of the most exciting shows I'll ever see in my life. Really got to be a part of something real special by working there. 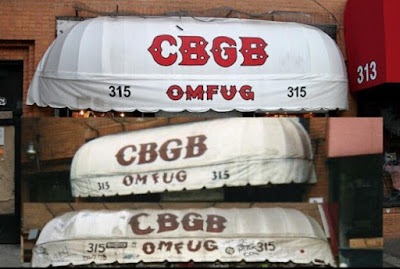 Drew is the best. I hope he gets a hundred grand .

The John Varvatos store should buy it – it would be perfect for them.

Pathetic. Gonna wind up in some i-banker's cheesy living room or man cave or whatever. Punk rock is not just dead, its corpse keeps getting raped by moneyed morons.

90% Off FINAL Auction Price Special
for EVG Readers Only

No, they shouldn't. Drew deserves this one. Great guy to work with.

I hope Drew makes a million from it, he's a solid dude and deserves it.

Love you Drew! Hope you make triple that amount off of it so that you and your beautiful family can stay in the East Village!

I hope Drew makes a zillion off of this finding so that he and his beautiful family can afford to stay in the East Village forever!

Go get some dough together and bid. It aint gonna save itself, Snowflake. Drew's Dad

Right...because Hilly and family were NEVER about chasing in on their popularity, except for those albums, that bigger theater on 2nd, the pizza place, the radio station, the gallery, the endless merchandise including dog outfits ...

It was a great business, but it was still a business.

He's good guy with a good banner with a good mentality which is good in my book.
Thanks for posting the photo.

I hope he makes a fortune off of it. Good luck Drew. Couldn't have happened to a better dude!

1. The albums showcased underground bands who played there and I doubt either did better than 20-50K copies.

2. The pizza place was hardly a moneymaker and the radio station certainly wasn't. Neither was the gallery. 2nd avenue theater? Uhhh...expansion? Big deal.

3. Big deal they sold merch including dog suits? Clubs sell merch. The door and the bar aren't enough to pay the bills.

4. CBGB is I'd say 90% of the reason 1975 on East Village underground culture or at least underground live music existed. No CBGB then no Continental, Pyramid, A7, Coney Island High, Nightingale Bar, or any other live music venue you probably don't have a clue about besides those.

5. Hilly never offered an CBGB franchise a la Hard Rock Cafe and House Of Blues when he easily could've, and what would have been/be wrong with 400 to 600 capacity CBGBs all over the country (Boston, Philly, DC, Chicago, LA etc.) if they supported underground/unsigned music and other artistic endeavors?

6. If you're gonna run your keyboard mouth about how CBGB was about the money at least mention the Record Canteen.

Hey, Dan C has it right to the extent that Hilly would have applauded Drew's entrepreneurial initiative and familial motivations. You, on the other hand, seem a bit conflicted or confused. The gist of your post appears to applaud the fact that CBGB was not about the money. ---Dan C never said it was but we'll let that go for now. --- In your number 5 you then lament that Hilly didn't go for dough as such would have 'supported underground/unsigned music'. Ask yourself: how is my post a refutation of Dan C.'s alleged 'false equivalence ? Then ask yourself what kind of person numbers their paragraphs and why. Or, if you want a question you can answer without so much thinking, ask if there is such a thing as 'a good Trump surrogate'.

Good for Drew. Super nice guy and an old school NYC familiar face that is always nice to see around.

First off, Hilly Kristol died in 2007 (a year after CBGB closed)/almost a decade ago, so how would you know what he would've thought or who he would've applauded if he were still alive? I doubt you knew much less ever met him, but I'm sure you'll say you did to (try and fail to) break my ba lls. Let's call it even and say neither you nor I would know how Hilly would've reacted if he were alive today. My guess (and only that) is he wouldn't have minded - the guy owns the awning, he can do what he likes.

Dan C accused Hilly and his family of cashing in (he was so furious about it he wrote "chasing in" LOL) and I pointed out all the things they did when the club existed which showed otherwise cuz I have a clue. And when you run your mouth about all the things CBGB did save the Record Canteen like he did you don't have a clue. Besides that if CBGB wanted to cash in they'd have bought the building long ago then either turned into a co-op or sold the property for an eight-figure sum closer to 50M than 0.

I am not "conflicted or confused." Yeah that's right, CBGB was never about the money cuz what they booked spoke for itself/CBGB's motivations, and you obviously don't have a clue about what the club was all about. I bet you never even went there. Also so what if I numbered my paragraphs? Re: #5. Hilly never franchised CBGB and I contend a franchise of nightclubs supporting underground/unsigned music would be a good thing.

Dan posted a false equivalence because he said this awning sale is no different than what CBGB did which is bullsh it, cuz CBGB didn't cash in, and wait a minute...the guy selling this awning isn't cashing in either. He made no moral promise to keep it or publicly said he'd never sell it cuz that would be cashing in. His awning, he can do what he wants with it. Lemme clue you and others in: anything new you see with the name "CBGB" in 2016 like that stupid cafe at Newark Airport is courtesy of the holding company who bought the name from Hilly's family who sold it because they were too lazy to bring back the club. If you wanna talk about POST-HILLY, POST-CBGB CLOSING, okay, yeah, his family cashed in, we can talk about and agree on that, but don't you ever talk sh it about CBGB when Hilly was alive and not expect someone to call you out.

"Good Trump surrogate" as in "one Trump would consider good enough to hire."