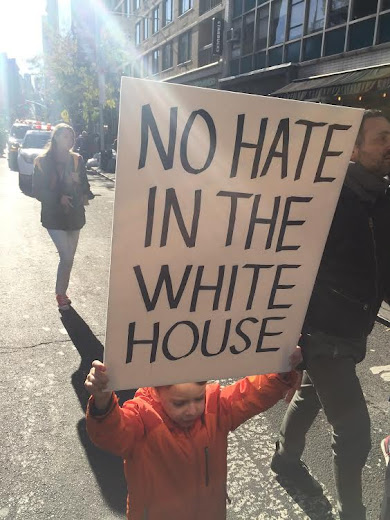 Another day, another Donald Trump protest. Several thousand people gathered in Union Square earlier today for a "Trump is NOT my president" march from Union Square to the Trump Tower on Fifth Avenue. (The Facebook invite listed 16,000 people as attending.)

David Bruce, of Manhattan, said demonstrating was less about challenging Trump than showing support to women, the LGBT community and people of color.

Organizers of the demonstration called it a peaceful protest. "Divided is the reason we just fell. We must unite despite our differences to stop HATE from ruling the land," the Facebook event said. 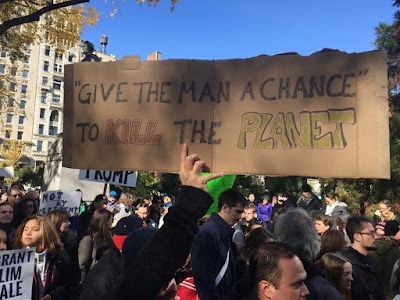 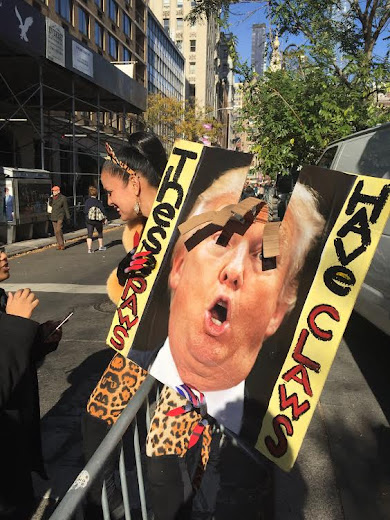 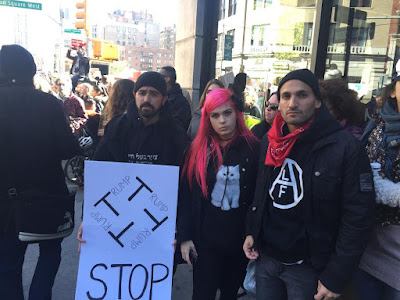 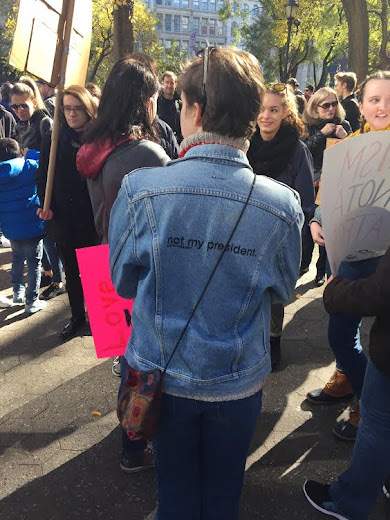 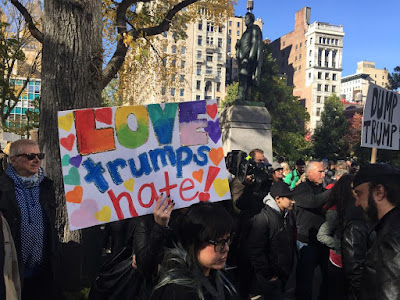 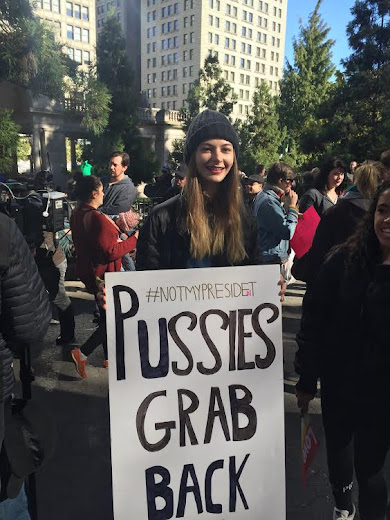 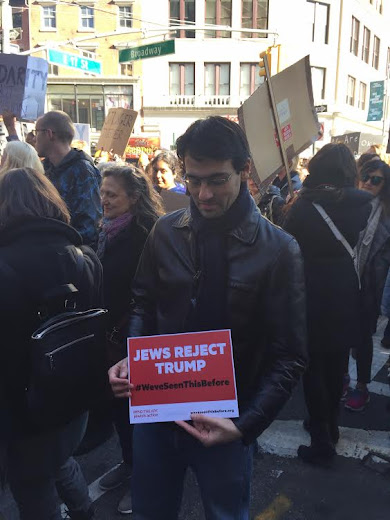 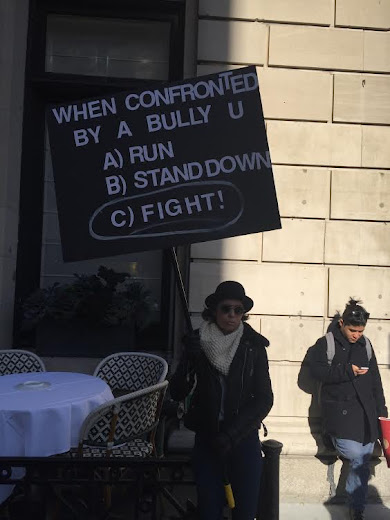 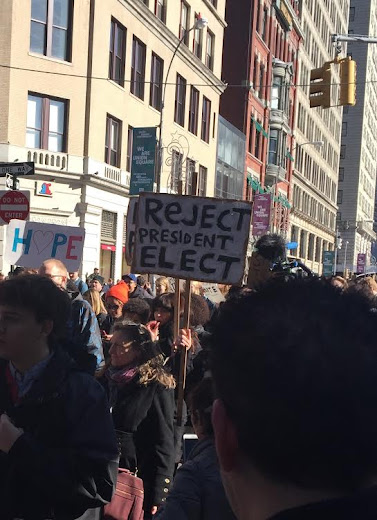 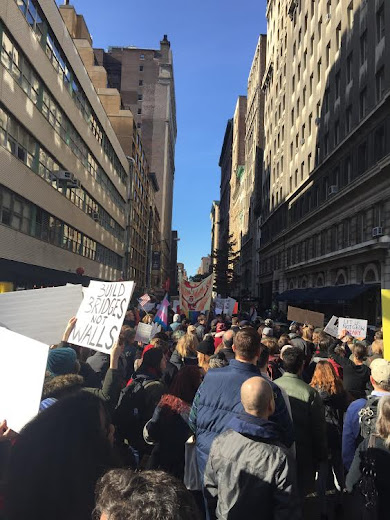 And via Derek Berg... 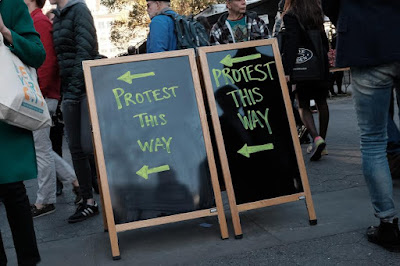 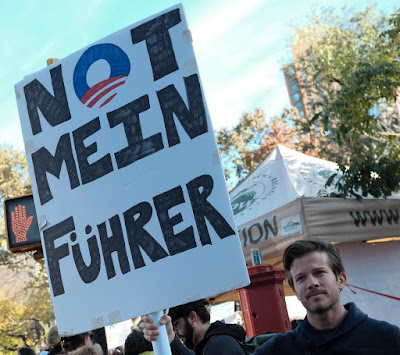 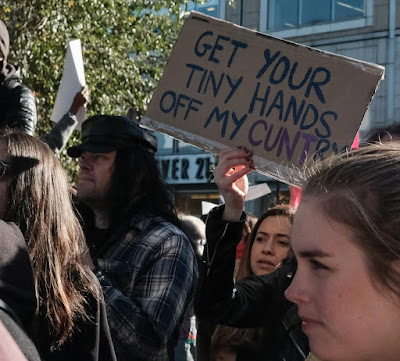 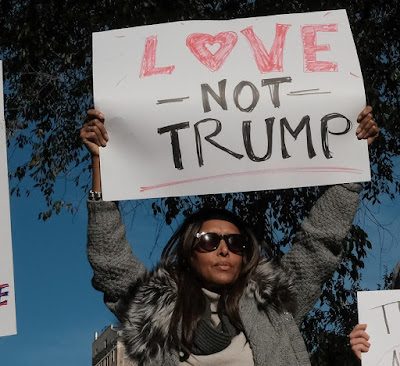 Trump is not my puppet and he's not my President either

I must say that I was in Union Sq for about 45 minutes and the vibe, both with the NYPD & the demonstrators was notably calm & non confrontational. There was a great feeling of unity & shock about the election of trump.

Power to the people, right on

Love these. I've been at every rally so far but my pics are not as good. I do have some video though but mainly been livestreaming on fb.

Unfortunate, the Election is over it was held accordance with the Constitutional process provided for it. Now is a time to respect the results like them or not and be the loyal opposition not bomb throwers with vulgar displays of immaturity. The history is one of peaceful transition of power lets not lose that tradition that so defines us as a Republic and people.

yesterday michael moore did a very interesting bit on the creation of the electoral vote and the need to go a popular vote
it's on film from when he attempted to get a meeting with trump, at trump towers, and he managed to get to the elevator floor where the secret service is standing strong. it was live streamed. now it’s probably on his face book page.

@8:23:
And just as constitutionally, the people of the Republic have the right to assemble. We should not just lay down for this new puppet "reality show" prez just because he's the prez. Look at how Trump treated Obama! Was that fair? His birther BS was free speech, so it falls under constitutionally tolerable, but the people are rising up and that's exactly the right response to this BIGOT. The End. Also, bomb throwers? As far as I can tell the people ARE ASSEMBLING PEACEFULLY. You need a check up from the neck up my friend. The U.S. has a long, long history of peaceful opposition, civil disobedience, and protest.

Great signs, folks. Keep it up.

I accept Trump as president, the head of the executive branch. But I do not accept him as head of state or figurehead of the American people in any way. This man does not represent me or my American values.

Not My President said...

Anon 8:23 protesting is as American as apple pie. Don't tell people to accept this result when A) the will of the majority of people was not met and B) these same people (YOU) have been blocking and trashing Obama for the last eight years but now we have to just accept it and move on? I'm sorry but no thanks. We will continue to protest, fight and obstruct this demagogue and all of the racists, bigots and silent apologizers every step of the way.

For the past year Michael Moore was predicting that Trump could win. He warned Democrats in the midwest that if they didn't get out and vote for Hilary, Trump would be elected, and he was right. Now he is predicting that Trump won't last four years and will either resign or be impeached. Once Trump's relationship with Russia comes out, once his corruption erupts to the surface, the Republicans will have no choice but to dump him. Then we will be stuck with Mike Pence, who as Governor of Indiana wanted to require women to bury their dead fetuses, and also wanted to make it a crime for gay couples to apply for a marriage certificate. Basically we are screwed either way, so get out there and join the protests!

HCinton is leading the vote count by 1.7 million as of Saturday. 7 million votes are left to be counted mainly from California, New York and Washington state.- big democratic states. She could win the popular vote by over 5 million votes. He's far from a majority president. And that's part of the point of the protests... he has to be inclusive. America for all! AMERICA FOR ALL!

Thus the reason for the Electoral College Big states not able to dominate the election.

Am I the only one who is tired of the self-righteous of Michael Moore? I agree with Anon 8:23 about the need to accept the results of elections. Wasn't that the fear the The Donald wouldn't and his followers would be in the streets chanting "rigged" election? What people should do is carry their frustrations into local action. I'd start by asking why so many of our politicians (I'd guess 98%) get reelected without any opposition. Why is there no healthy debate for the office of council person, member of the State Assembly or Senate? Year after year the same politicians get reelected.

This is the beginning of a civil war. Those, including myself who refuse to accept bigotry, xenophobia and homophobia become part of our daily lives will not step down nor allow hateful bullies to dissuade or stop us. Even though President Elect Donald Trump aka President Elect Piece of Scum is soon to be at the reign of our country, he can't destroy our hearts or our need for compassion and decent human respect. In my 41 years on this planet, I have never felt so terrified and uncertain in my life than I do right now. I now wake up with a pit in my stomach and the ever gnawing reaction to look over my shoulder for fear of my life as a gay man. This is just the beginning of more hatred, discrimination, and violence. WTF is happened to our humanity and society?

Trump isn't doing shit. He's all talk no walk. He'll be a moderate at worst. Bannon is just a vanity hire. We don't have the money to build a wall, ban Muslims, deport 11M illegal immigrants etc. He's not jailing Hillary either.

When push comes to shove he's chickenshit e.g. his meeting with Obama. So polite and gracious to Obama to Obama's face. Coward.

Nice to see people protest and be respectful