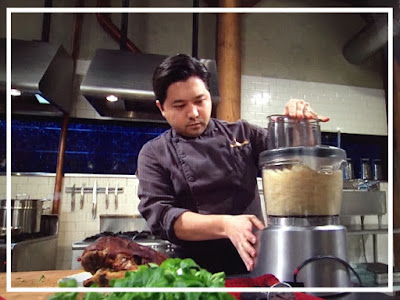 Here's some news about Trinity's Services And Food for the Homeless (SAFH) on Ninth Street and Avenue B. Via the EVG inbox...

This past week, our administrative director, Alex Lawrence, was selected as one of the competitors on Food Network's Chopped.

The episode had a Thanksgiving theme — titled Turkey Day Heroes — featuring employees and volunteers who work with various soup kitchens or feeding programs.

Contestants are asked to make dishes with "mystery ingredients" that are only revealed to them minutes before they begin cooking. Alex was able to make it all the way through to the end, and ended up winning the competition! If you haven't had a chance to watch the episode, upcoming showings can be found here, in addition to wherever you stream television.

By working alongside other contestants who have committed themselves to feeding the hungry, Chopped was able to bring to a wide audience the very real challenges and needs that organizations like ours face.

The episode airs again tonight at 11 on the Food Network. Details here.

And if you are interested in making a donation to SAFH, which was officially founded 30 years ago, you may go here.
Posted by Grieve at 11:12 AM

Email ThisBlogThis!Share to TwitterShare to FacebookShare to Pinterest
Labels: Trinity's Services and Food for the Homeless

How wonderful! Well deserved. :) We could use some love and heroes right now.

Right on! Trinity's SAFH is a great program.

I fell asleep before I saw the winner! Thanks for posting!
This guy seems awesome. I've been to many rummage sales there and it's such a nice environment