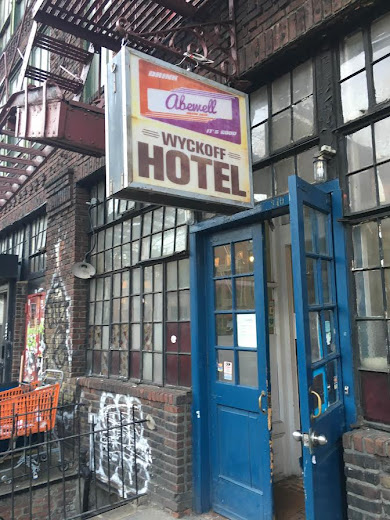 The CBS drama "Blue Bloods" is filming on the Bowery... and some faux signage arrived outside 340 Bowery for the Wyckoff Hotel (and drink Abewell soda!).

The address is the former Whitehouse Hotel, the hostel/flophouse combo that stopped accepting reservations for back-packing thrill seekers in September 2014.

Plans were filed via Sam Chang in April 2014 to "convert 4-story lodging house into a 9-story hotel," according to DOB records. The city disapproved the plans again in September 2014, records show.

Meanwhile, the four-story building erected in 1916 between Great Jones and Bond still serves as a permanent home to a handful of low-income residents.

And, according to a report in the Post, current resident Roland Davis is no longer allowed to file suit against current or former owners without proper legal representation or approval from a chief judge. Davis has sued the past or current owners of the Whitehouse Hotel 23 times in seven years, losing every time, the Post notes.

Davis, an $8.32-a-night resident, would file claims in Housing Court demanding that management make repairs to his tiny windowless room, and would then refuse to let the workers in, according to court papers.

The Whitehouse Hostel has closed for good on the Bowery
Posted by Grieve at 9:30 AM

There is a hotel, on Wyckoff and Halsey, that's kind of scuzzy, if the reviews are right. But, as one of the comments says: "(helooo it's NYC)".

Tom Selleck is a pro-Trump as shole. Boycott this show!

'Love the ridiculous currently running commercial where he's urging retired/older people to take out second mortgages on their homes from a big loft in what looks like a big city downtown. Paid actor endorsement scuzzball!

Episode just aired. Blue Bloods at its best in EV!