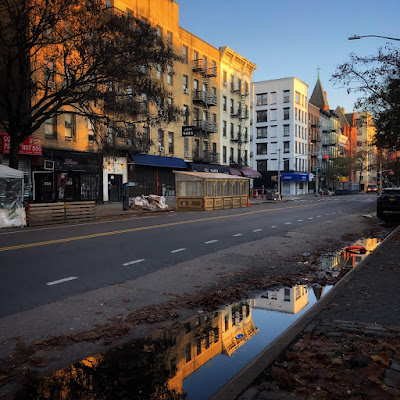 • The Bowery Mission and City Harvest need volunteers this holiday season (FOX 5)
• Remembering Aldo Tambellini, the pioneering filmmaker and artist who in the 1960s opened the Gate and the Black Gate in the East Village, screening films by Kenneth Anger and Yayoi Kusama, among many others (The Guardian ... ARTnews)
• East Village restauranteurs talk about the possibility of the state suspending indoor dining (Gothamist)
• An analysis of the ZIP codes New Yorkers exited between March 1 and Oct. 31. Topping the list: Upper West Side, 10023 — 3,368. At No. 20: East Village, 10009 — 728 (The Post)
• East Village resident Douglas Stuart discusses his acclaimed debut novel, "Shuggie Bain" (New York)
• The Landmarks Preservation Commission is reviewing proposals to renovate and refurbish the façade of Bathhouse Studios on 11th Street (NYY ... previously on EVG)
•  A positive review (it "wows") for Mokyo on St. Mark's Place (Forbes)
• A preview of the new Half Japanese record (Dangerous Minds)
• "Dash & Lily," an eight-episode holiday-themed romantic comedy series, debuted on Netflix this past week to positive notices (100% on Rotten Tomatoes!).  As you may recall, the crew filmed quite a bit around the neighborhood in late 2019 (here and here for instance). In the trailer, you can see the locations include Two Boots on Avenue A and the Strand...
Posted by Grieve at 10:00 AM

The places where most New Yorkers have fled during the pandemic aren't where creatives, visionaries, intellectuals and trendsetters are found. It's based on the preferences of the status quo.

It’s no surprise that three of the top four zip codes that have been abandoned due to the pandemic are all on the Upper West Side, and the other one is Murray Hill. None of these areas any longer resemble the residential neighborhoods they once were.

The UWS has really changed in character, with its mean-spirited moneyed classes pushing aside the locals, endlessly complaining about liberals, street vendors and rent stabilization laws, and suing to remove homeless people from a hotel in the middle of a pandemic. They wouldn’t even let a pulmonary doctor, who happens to be an old friend of mine, stay in his brothers UWS apartment when he travelled to NY in the beginning of the pandemic. He is a nationally recognized pulmonology expert who came back to his home town just to volunteer to save COVID patients, and as soon as the coop board found out they had him banned from the building.

As for Murray Hill, it’s like a giant boozy brunch in the middle of a frat house, so good riddance to all those who have left for the Hamptons.

These people are in for a big surprise if they think they can run away from the virus. "Living room spread" is driving the latest surge, and just wait until they see what happens after the holidays. Convincing some people to cooperate is a lost cause. I can’t seem to convince several of my own family members that their plan to get relatives from several different states together for Thanksgiving is a very bad idea. At least they can’t say they weren’t warned.

I can tell you that in 10022, building after building have 10-20% vacancy. Those Post numbers are not even close to reality.

There is no reason for the moneyed class to stay in NYC when all of the fancy restaurants and the high society institutions aren't operating as usual. They can leave for the Hamptons and other wealthy towns where their 2nd homes are located. Some of these businesses who have served them are also following en route.

The city will be changed forever from this pandemic. I see a transformation of the definitions set upon by the status quo and a re-arrangement of demographics. Many people who always dreamed of living in the Big Apple are now moving to NYC from other parts of the country to take advantage of lower rents due to the mass exodus of the wealthy and more importantly, their upper middle class climbers looking to join them.

I see a new tribe emerging. A group of creative people who'll be living north of the city and changing the world there but aren't wealthy and yet they will be splitting time between the rustic charm of those small cities and the cosmopolitanism of NYC. Sort of a new identity in the making...that puts its feet in two types of urban setting.

Nevertheless, it will be an interesting time in the coming years if we can outlast Covid-19.

Yeah, the UWS has really disgraced itself in the pandemic. It's sad.