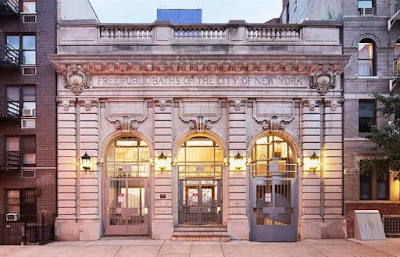 The landmarked Bathhouse Studios on 11th Street between Avenue A and Avenue B is now on the market.

Tell them what you get...

Cushman & Wakefield has been retained on an exclusive basis to arrange for the sale of Bathhouse Studios, a one-of-a-kind multilevel studio and event space topped by a magnificent residence...

Built between 1904 and 1905 and designed in the Neo-Italian Renaissance style, the former public bathhouse was converted into a high-end studio in 1995 by Pulitzer Prize winning photographer Eddie Adams. Designed by esteemed architect Gene Kaufman, the studio was used to house Adams’ work for Parade Magazine and Associated Press, in addition to some of his other major achievements. He also worked and conducted shoots in the studio.

Furthermore, both the kitchen and bathrooms are tiled and enjoy top of the line appliances. The residence walks out to a sun drenched 2,200 square foot outdoor deck that can serve home to remarkable gatherings.

The listing also notes that there are roughly — gulp — 10,000 square feet of air rights available.

The Bathhouse Studios website has a lot more on the history of the building ... including some photos of what it looked liked before it was restored in 1995... 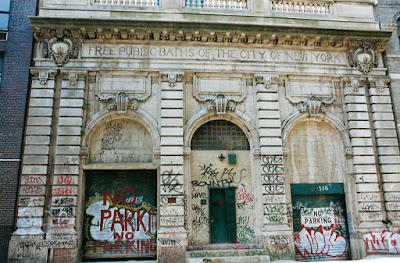 The building also served as a backdrop for the 1981 film "Ragtime." Find even more history here. The Bathhouse Studios was landmarked by the city in 2008.

oh no!. how can a "landmarked" building have 10,000 sq feet of air rights as in sticking a tower on top of it air rights? This is really bad news for the neighborhood, are we looking at Moxie 2.0 on Avenue B?

Real Estate lesson - The Moxy between 3rd and 4th is not in a Landmarked district, nor were the buildings that were demolished individual landmarks. You can't just build because you want to. The building will continue to serve as an East Village masterpiece and any additions made will not be seen from the street level.

Nah, they'll sell them to a neighbor.

@11:49 AM
This building will get additional floors I am certain of that. A developer will purchase with the intent of gutting the building, and building a condo, perhaps 6-7 additional floors and only the facade will remain. The Landmarks commission's head has not met a developer she hasn't loved and caved in to. The Mayor is hell bent on continuing Bloombergs leveling all that was NYC and creating a legacy of a completely rebuilt city for the rich city.

"esteemed architect Gene Kaufman." Was that person able to write that down without rolling over laughing?

Yes, more than likely any building -- or, more likely group of buildings --adjacent will be at risk.

Air rights have supplanted tenant, civil and civic rights in this city

This place has been problematic from the get-go. When Eddie Adams bought it the permits posted on the construction fences specifically said it was going to be residential, then they built it out for commercial use and started bringing in things like the rap video shoots starting late at night that were filmed on their outside deck, keeping the entire area awake, or the bass-heavy special event parties that throbbed through surrounding walls until the wee hours, and let's not forget their charming habit of claiming the parking spaces directly in front of the building as exclusively theirs and having others who dared to park there towed. When the rehab first started, the construction crews spent many weeks jackhammering out the interior, (which, given that it was an old bath house, meant tearing out lots and lots of cement and concrete), with the vibrations shaking surrounding buildings from early in the morning until late in the day, six days a week. When the place was finished they held a big opening night shindig, to which none of the immediate neighbors they had inconvenienced for so long were invited, since we weren't important or famous enough, after which Adams endeared himself to us by loudly boasting in more than one forum that he had single-handedly "saved the block", completely ignoring and dismissing the 11 A-B residents who had been there long before him, who were there when he would not have set foot in the neighborhood, much less bought a building in it, who worked to restore the abandoned buildings, run out the drug dealers, etc. We cleaned up the block for him, not the other way around. And now I am guessing there is more construction in our future when this place is sold and topped out. Sigh.

I live two doors down, I love this event space it brings flavor to the block it h never bothed me even the super policing the parking spots out front. Sad to see it go