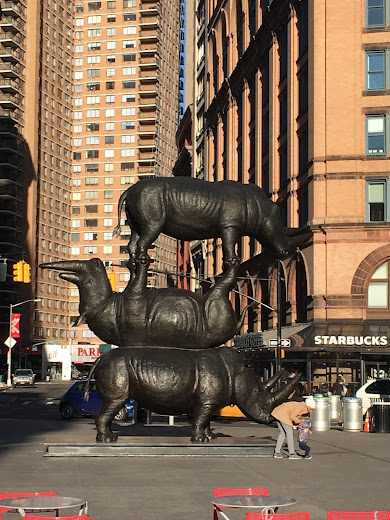 Per the BBC: Sudan, who was 45, lived at the Ol Pejeta Conservancy in Kenya. He was put to sleep on Monday after age-related complications worsened significantly.

The artists are hoping to collect 1 million messages worldwide to "put them toward a petition for approaching governments about eliminating the demand for rhino horns through education."

The sculpture will remain here through May. You can read more about the project here.

Sudan, the last male Northern White Rhino has died. We have tears in our eyes and emptiness in our in hearts as we read this news. It was our greatest joy to spend a wonderful week with him at Ol Pejeta Conservancy last year and we will treasure that time for the rest of our lives. In the last 24 hours Sudan was suffering a great deal from an infection in his leg and unable to stand. The veterinary team from the Dvůr Králové Zoo, Ol Pejeta and Kenya Wildlife Service made the decision to euthanize him. Meeting Sudan changed our lives. It became plainly obvious to us that the extinction of his species in our lifetime was a crime beyond all comprehension and we could not just stand by and watch. How could we, as an intelligent, evolved, and presumably empathetic species let this happen? Moreover, cause this to happen. Poor gentle Sudan spent his entire life fighting. Fighting to stay alive in Sudan where he was captured. Fighting to stay healthy in the Czech Republic zoo, fighting against poachers once he was brought back to Kenya, fighting against an infection in his leg which sadly was his last fight. Unfortunately, Sudan’s death leaves just two female northern white rhinos on the planet; his daughter Najin and her daughter Fatu, who remain at Ol Pejeta. We say goodbye to Sudan, the last man standing on earth and we ask you to commemorate his life if you are in New York by laying flowers at the sculpture site (Astor Place) and at Sudan’s feet or making a donation by visiting www.goodbyerhinos.org SUDAN 1973 - 2018 #GoodbyeSudan #GoodbyeRhinos #RIPSudan

The poor thing... this poorly executed piece of public art probably pushed him over the edge.

There might still be some hope for this species: https://www.theguardian.com/commentisfree/2018/mar/20/sudan-northern-white-rhino-dead-species-endangered-species-conservationists

I bet all you art critics feel bad now, huh? A few Rhino's for a few months, on display, hurting no one, and you would have thought the world was ending reading some of the comments here.

The poor thing... this poorly executed piece of public art probably pushed him over the edge.

@8:20 PM
This sculpture's placement was not about the rhinos but the city's plans to turn the blocks from Astor Pl up to Union Square into "midtown south". Corporate funded use of this newly renovated (using tax dollars) public space is now a selling platform for anyone with enough cash. Was this the right place for a sculpture about saving the last 3 white rhinos? Is the EV the home of the kind of people with the political or financial resources or at very least celebrity fame to make a difference?

This sadly was a lost cause considering the advanced age and health of the last male rhino. That is why so many of us believe this sculpture is nothing more than an attempt for the artists to bring attention to themselves by taking on a sympathetic yet futile cause.

'Now I am become Death, the destroyer of worlds'.

Actually, I have read on at least one site that there is hope for creating another generation of white rhinos via in-vitro fertilization; there exist samples of Sudan's sperm, and it may be possible to impregnate one or the other of the remaining females. Let's hope.