Last weekend for Three of Cups 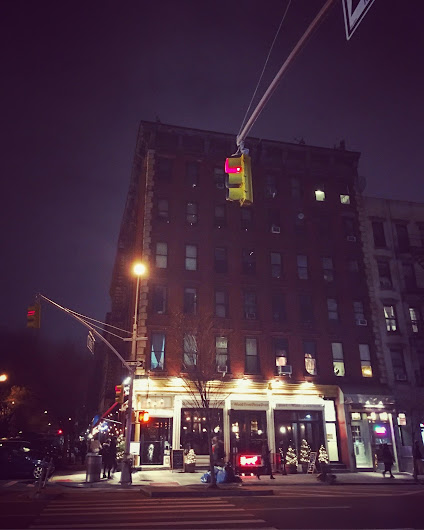 This is the last weekend for Three of Cups, which opened on First Avenue at Fifth Street in December 1992.

As first reported on March 22, the pizzeria and Italian restaurant was closing after service on April 1. (A few people thought this might be an April Fool's Day joke. It is not.)

The reasons are many that we are at this moment, with all of them meaning that I can’t sustain it any longer. It’s the end of the longest thing I’ve continuously been involved with, almost 1/2 my life, nearly 26 years.

My wife worked here before we were married, my children grew up playing here and my son has worked here with me for the last two years. Three of Cups is a big part of our home and lives.

The Three of Cups Lounge is closing too.

Emmy Squared, the Williamsburg-based restaurant serving burgers and Detroit-style pizza, is expected to take over this corner space in the months ahead.

Previously on EV Grieve:
After nearly 26 years, Three of Cups is closing on 1st Avenue; Emmy Squared arriving next?
Posted by Grieve at 4:30 AM

Email ThisBlogThis!Share to TwitterShare to FacebookShare to Pinterest
Labels: Three of Cups

This is where my fiancé and I had our first date. Over three years ago in 2015. I was skeptical since we met through a dating app, but the moment his handsome, scruffy face walked through that door, I knew he was the one. Sounds corny right? He was the one who chose the restaurant since he lives in the neighborhood. He always commented how he loved the spot. He said it reminded him of a restaurant in Savanah, Georgia, where is he originally from. He also said the waitstaff go out of their way to make you feel at home. Boy did they ever.

Our relationship started that night there and got very serious soon after, Every year since that, we go on the same date, October 24th, in the evening, and have a fabulous dinner. The great thing about Three Cups is its charming ambience and delightful menu. Such a beautiful and romantic spot. I am saddened to hear of its closing. Each time I walk past Three Cups, I am grateful. It provided the perfect setting to a chance meeting that changed the course of my life. And for that, I am eternally grateful, especially since we are getting married on October 24th this fall.

I extend my very best to the staff and owners. This is going to be a huge loss for us and those who loved it so. I can't believe its been in the EV so long. Places such as this should exist and should not be taken away to overzealous and greedy landlords. Three Cups will aways hold a special place in my heart.