Baci e Vendetta has closed on Avenue A: 'it simply wasn't sustainable' 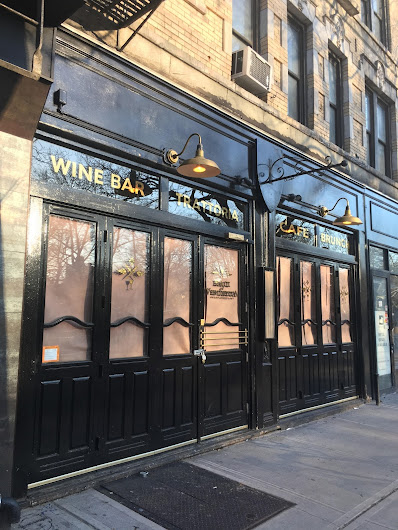 Baci e Vendetta has closed at 131 Avenue A after nearly 16 months in service.

Veteran restaurateur Paolo Secondo was set to take over the Italian cafe for a new concept. Secondo received the OK from CB3 last month for a new beer-wine license for the space here between St. Mark's Place and Ninth Street.

However, Nic Ratner, a partner in Baci e Vendetta, told me that the deal with Secondo fell through ... "and as a result we shuttered Baci e Vendetta and returned the space to the landlord."

"We gave the beer and wine thing a go with a heavier emphasis on food and it simply wasn't sustainable," Ratner told me via email.

Ratner said that he and his business partner Robert Morgan, whose bars include Kingston Hall on Second Avenue, will focus on the return of the Ninth Ward at 180 Second Ave.

Baci e Vendetta opened after an extensive gut renovation in December 2016. This space was the 10 Degrees Bistro until the fall of 2015 ... and the Flea Market Cafe before that.

Expect a for lease sign here before too long.

Previously on EV Grieve:
Team behind Shoolbred's and Ninth Ward vying for 10 Degrees Bistro space on Avenue A
Posted by Grieve at 4:30 AM

That's too bad. Dinners here were pretty affordable when taking advantage of the 2-for-1 happy hour deal. It always seemed pretty busy too. The buildout of the restaurant looked really expensive--even the bathrooms had fancy tile and fixtures. Maybe they just couldnt recoup all that?

Very hard, if not impossible, to get back $ that was put in and make a profit
especially if
you dont own the building or have a very very very reasonable rent.

It amazes me that people are still opening restaurants anywhere in Manhattan with the insane greedy landlord rents, commercial building taxes, low margins on each plate served and the sheer glut of restaurants in every neighborhood. Very few places which have opened in the past several years here appeal to me but then as a long time resident of the EV I realize these places have no interest in what locals want but their target audience is the transient EV resident, tourists or the uptown crowd.

PS enough with "themed" restaurants, this is not an amusement park.

Contrary to what Anon @8:51 writes, the survival of many small restaurants in the East Village depends on regulars who fill the seats Sunday to Wednesday. Yes rents are high, taxes are high, insurance is high, the vigilance needed to keep a food establishment in line with food safety guidelines all take a toll on the bottom line. Add to that that customers have come to expect first class ingredients and the cost of running a restaurant is almost prohibitive. Everyone who things of a restaurant believes that their vision will "make it"--that they will succeed where others have failed. I ate here a few times, but I wouldn't call myself a regular. It was good, on some nights better than good. I have lived in the East Village since 1966, I am still waiting for someone like Anon @8:51 to explain to me about "what locals want." Could someone please explain.

Guess I can throw out my left over happy hour coin :(

for the record they told residents that they had every intention to be a bar like their others we said we would support a beer and wine restaurant they showed up at the cb with a high end menu which we never saw and almost got full liquor bc of it. their application and plan said 8 bar stools and what they said at cb was how could we be a bar with 8 stools. they moved in s. et the place up with 13 bar stools and cocktail tables additional stools changed to limited bar menu tried to tap the gas foil says obtain permit pipes wet on inspection. inspector took no names they ran the place with electric for some time the plan was to wait awhile then get their upgrade to full liquor then push into the other black prepped spaces Yoshi sushi expand and have their cocktail lounge didn't want them there bc I felt that they would continue to build on their empire all along A they worked with Palitz to try an obtain their full liquor but there was an open investigation with SLA for misrepresenting application and change in method w/o going to CB now next applicant it never ends

so far from my group 32 otherwise op licenses stopped with 14 something other than liquor and only two became chains the rest are beer and wine early closing, fixed faced, etc.

It's a humiliating bitch to get done and the truth is that most residents think that this isn't an answer. a waste of time and belittle us

8:51 am here.... To be completely honest I would prefer less restaurants and way less bars. There are a glut on eating places and when I do eat out I like a quiet place where people are not drunk, the music is in the background and the prices allow me to eat out twice per week. I applaud others that attend CB3 meetings and speak against the influx of new business seeking full liquor licenses. If you want to see what the EV near future will be take a stroll through Hell Square on a weekend evening. The LES has become the designated night life hood so the rest of Manhattan can get a good night's sleep. (no I am not from Ohio nor do I have any intention of moving there).

I too am for what has always made a NYC neighborhood a functioning neighborhood and that is the things we really need day to day like delis, hardware stores, tailor and laundry shops, drug stores, and other diverse services. A block with nothing but restaurants and bars only offers noise and litter.

I went to Baci one night for a solo drink and found myself having a great conversation with a super cool guy who lived upstairs. A true EV old-school cat. Made me happy. Thanks for the memories...


What do locals want? Man, oh man, I would like a quiet family-style restaurant. Without the ambient light, the pretentious wait staff, and the precious artisanal food scraps.

Back in the day, every corner of the EV had a great restaurant, where you can sit down for the night and enjoy food and conversation without being squeezed out of the seat, table, or food.

Now we have these junk restaurants as bad as the junk developers -- all selling the hood. Or the illusion of.I

i.e., an emphasis on alcohol would have been sustainable, and thus the nature of "restaurants" in the neighborhood today.

I'll chalk this down to the curse of, on, and because of Ten Degrees Bistro, for being deceitful and disingenuous in its illicit way of getting their liquor license and claiming in "saving" Flea Market Bistro, and on being snooty and snotty to the locals and elderlies.