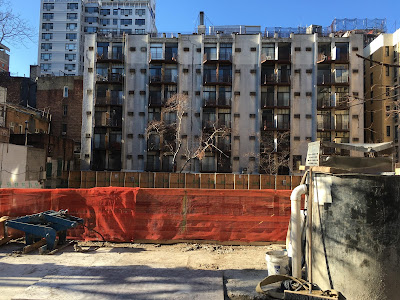 We received a news release yesterday from the Lightstone Group about Moxy East Village, their 285-key hotel going up at 112-120 E. 11th St. in partnership with Marriott.

The news was primarily about "the close of $91 million in financing with Bank of the Ozarks for the company's third Moxy hotel in New York City."

There were other details about the hotel between Third Avenue and Fourth Avenue that may (or may not!) be of interest.

To the release, via the EVG inbox:

Moxy East Village will be located south of Union Square in the East Village, across from Webster Hall. In a nod to Moxy's vibrant, ever-transforming neighborhood, the hotel's design concept is based on urban archeology that references the city's past, present and future. Conceived as a vertical timeline, each floor reveals a different layer in Lower Manhattan's history, creating a sense of discovery for guests.

So, to recap: each floor will be designed after "a different layer in Lower Manhattan's history" and there will be "six new eating and drinking establishments for guests and locals."

Previously on EV Grieve:
An updated look at that Moxy hotel for 11th Street
Posted by Grieve at 4:02 AM

This is a good time to remind everyone that this should never have happened if we had a real LANDMARK PRESERVATION COMMISSION (LPC) that actually prioritized historic preservation over the goals of de Blasio/big real estate. These century old buildings should never have been demolished had the LPC designated them. Instead, against the recommendations of our preservation experts like GVSHP, they were denied landmark designation and then our esteemed Mayor appointed the CEO of Lightstone to the EDC which is common knowledge, is a city agency that is a front for REBNY. If this pisses you off (and it should) know this, BdB is now trying to make changes to the city charter to take more LPC applications out of the public view. Things like additions, facade changes, substitute materials etc would be handled at the staff level so the corrupt Chair/BdB/REBNY can rubber-stamp the most egregious alterations without community resistance. On Tues Mar 27, please come and testify at the LPC against this REBNY giveaway at the expense of our historic neighborhoods.

Moxie East Village will be located south of Union Square, north of Astor Place, and 2,115 feet west of Third Avenue. In a nod to the dozens of East Village families Moxy has displaced, the hotel’s design concept is based on an exciting refugee theme. Conceived as a vertical timeline of hopelessness and despair, each floor reveals a different layer in Lower Manhattan’s affordable housing crisis.

The micro-rooms are sensibly sized to remind guests of the former tenants who once hid in their closets to avoid eviction. Guests will enjoy a wide variety of canned goods served in convenient go bags. Amenities include flare guns, cell phone charges, and free cyanide pills for when it's time to check out but have no place else to go.

Enjoy every stay at Moxy as though it’s your last.

Talk about moxie.... This hotel's theme is like a mass murderer getting tattoos of all his victims. Ask him about them and he will lovingly tell of their lives before he snuffed them out.

How many times must we endure these LES cultural ripoffs used to give street cred to a generic corporate hotel or luxury apartment building? As if anyone who will stay at this Moxy would have any interest in the neighborhood's history, they will only want to go Moma Fuku and one of the hundred sports bars in the East Village.

de Blasio apologizes. He didn't mean to say he was championing affordable "housing". He meant to say affordable, rampant "development".

@Kirsten Theodos, well-said. An absolutely shameful sell-off of our city for the benefit of our crooked mayor, and his real estate developer buddies, no one else. NOTORIOUS and Anon. 8:49 also pegged it, not much to add.

Except - "The micro-room, macro-amenity hotel will feature...community based social programming"? What, are they going to run a soup kitchen out of the place? A needle exchange? Or are they thinking more along the lines of Santa Con?

It reminds me of the harlem bus tours that started in the 70s. . "Oh, look, honey, all those nice Negroes". But this is one better. Why take a bus to see real Negroes. The Moxy intends to be a disneyfied version of the EV. Nobody will ever have to get on a bus and leave the hotel.

The Midwest parents of the NYU students who can afford to stay at the Moxy are going to be mortified at the size of their rooms. Aww..poor things...have some compassion for them :(

A.k.a. Homeless shelter. It looks like with that marketing pablum above, they have a plan B. These dopes recently got a big ass 9 million dollar loan from the Bank Of Ozarks, if this generation would put down their phones so their brain cells can regenerate, it's possible that the customer base will become nil and will have a rough ass time paying it back. And it's very certain Marriot is aware of how much this stupid city will pay for their micro-rooms to warehouse homeless people.

It's appropriate for the neighborhood. The kids who stay here will actually pump $$$ into the area. I am for it.

These comments are hilarious.

I'm looking forward to being mugged on the alphabet city gang land floor.

Then I'll have a coffee in the Tomkins Square Riot Cafe.

I believe they are going to have a crusty and their dogs cafe to reflect the modern day EV blight. Also a floor devoted to a hyperdevelopment theme with obstructing bollards and perpetual scaffolding