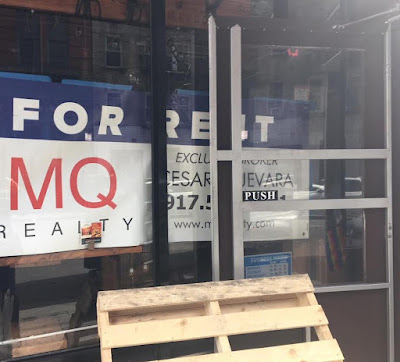 An EVG reader spotted workers cleaning out Mandolino yesterday, bringing an end to the pizzeria that opened in January 2017 here between Third Avenue and Fourth Avenue.

Speaking of Instagram, Paris Hilton recently stopped by for some reason...

EVG readers we spoke with generally liked the place, which offered a variety of salads, pastas and whole Neapolitan pies (no slices). Despite being next door to an NYU dorm, it didn't seem to attract a big student following. Said one reader: "It was 'fancy' pizza, a teeny bit expensive, so maybe not student-y enough."

And as previously noted, this is a tough pizzeria market right in this area ... you have Joe's around the corner on 14th Street, which serves one of the city's best slices ... there's Gotham Pizza on 12th Street and Third Avenue ... Bruno Pizza on 13th Street between Third Avenue and Second Avenue ... not to mention Danny Meyer's buzzy Martina, which opened last August on 11th Street at Third Avenue.

The Mandolino space was previously home to Sahara Citi, the hookah/hummus restaurant that closed in August 2016 after four years in business.
Posted by Grieve at 4:15 AM

Personally that list of pizza places at the end of the post doesn't do it for me, but I do love Nicoletta and Posto (and its sister restaurant Gruppo). I have hope that Joe and Pat's will fill the casual slice and/or pizza delivery spot in my pizza roster!

I'm very sorry about Mandolino, the owners are lovely people.

Does anyone do any market research before they open places?

Not sure how you could compete with Motorino and Luzzo's 5 minutes away for the neopolitan market.

Sorry they closed down so quickly (next time say hello to market research) but being located close to NYU students only means that normal people will be avoiding your location. This place was open for less time than Joe & Pats has been moving into Lanza’s, and 18 months later our friends from Staten Island are still in “coming soon” mode. Hoping for a miracle I went by Joe & Pats few days ago but the place was complelelty dark, locked up with no activity, and the furniture already looks dusty. Yet EV Grieve got a hot “tip” three weeks ago that they would be opening in 3 weeks. Times up. Still waiting!

I never tried this place b/c the "no slices" thing is an issue for me; if I'm hungry I want ONE slice, not a whole pie.

PS: I don't count Martina's as being like this place, b/c Martina's won't take cash (and BTW they have NO IDEA how much business they're losing due to this policy; the owners cannot even quantify how much more money they'd make if they took cash! Talk about not doing "market research"!).

Further, Martina's is the only place I know where they have cold bottles of champagne to drink with your pizza. NOBODY except dorks drinks champagne with pizza. This is NYC; get real!

I'm guessing there's something with the landlord. Nothing can stay open in this spot.

damn, that place was my go to for a good Neapolitan pie. shame

Too bad. I walked past there a lot and never went in, but always wanted to. Oh well :(

That's one of the saddest most desperate instagrams ever. #pleasepatronizeus #billstopay #help