A diner for the former Empire Biscuit space on Avenue A? 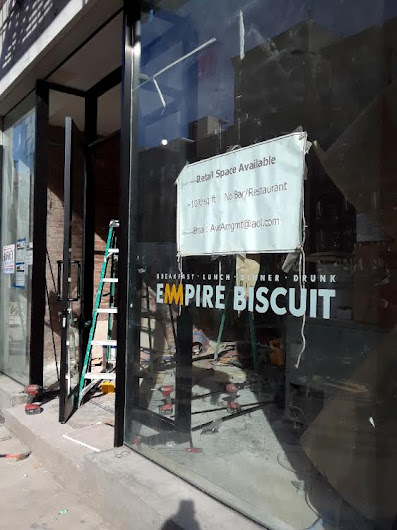 Workers removed the paper that was covering the front windows at 198 Avenue A yesterday (thanks to Lola Sāenz for the photos!) ...

A tipster told us earlier that a diner was coming to what was previously Empire Biscuit here between 12th Street and 13th Street. (That diner rumor has not been confirmed.)

In any event, something is coming to the space... as renovations continue inside. 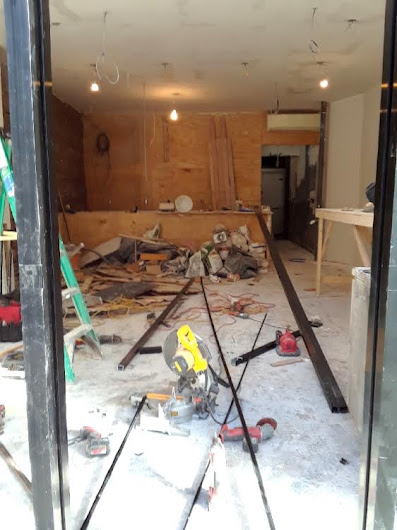 The storefront hasn't been in use since Empire Biscuit started peelin' potatoes in January 2016.
Posted by Grieve at 4:15 AM

Anything but a bar is my motto. Will this diner ask for a liquor license? Most definitely. Will this diner transform into a bar/restaurant? You betcha. Will CB3 grant it? As certain as the sun will rise tomorrow.

Is there a GoFundMe page for this location?

A diner there would be very welcome. You don't often see diners mid-block, though.

Sweet. Love me a good diner.

Diners have to going out of business all of the city for years. There have been numerous news stories regarding it. Do these people live in a bubble?

It will not be a diner in the classic sense, breakfast all day, affordable to just about everybody if a diner is really in the works for this spot. The new residents of the hood prefer foodie stuff or food equivalent to reheating a "hot pocket" which they consider comfort food. My suggestion to the people opening this place, include lots of melted cheese a la Raclette around the corner.

I think a sharing menu restaurant based around hot pockets or velveeta cheese dogs would be very successful as long as their was a lot of alcohol that made the drinker feel sophisticated and not just a addict.

Hey, I wouldn't eat at Raclette every day, but it's freakin' delicious.

That space is a little small for a diner. Maybe something like Brindle Room?

Right. A "diner". A diner like the new version of the Empire Diner in Chelsea. Like Taqueria on St. Mark's is a taqueria. Or Diablo Este was a Mexican cantina. It will be a Vongerichtified diner.

"Diner" is the new "restaurant". I guess SS & Co. will fall for this that it'll be a "diner" and owners are making their sell to grant them a full liquor license palatable to Ariel's former venal incubator. And once they get that liquor license, they'll have DJ's and front door with red velvet rope and manned with security guards attracting the party bus crowds and unlimited boozy brunchers.

Once that has happened, people would be longing for the pompous grins and beards and their ladies, or the midget pirate serving champagne days.

I can't wait for the new establishment to remove the word "Drunk" from the signage on the window. The guys who opened Empire Biscuit were so disrespectful, and as we all predicted, they couldn't survive without the support of the neighborhood. I hope the people taking over this space create a diner that is about feeding us, not staying open late to cater to the people who come here to party and keep us up all night.