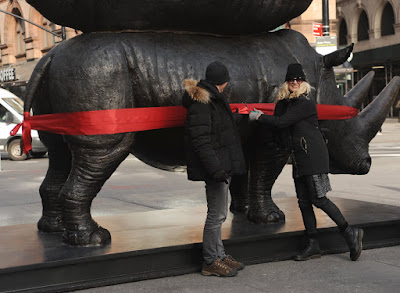 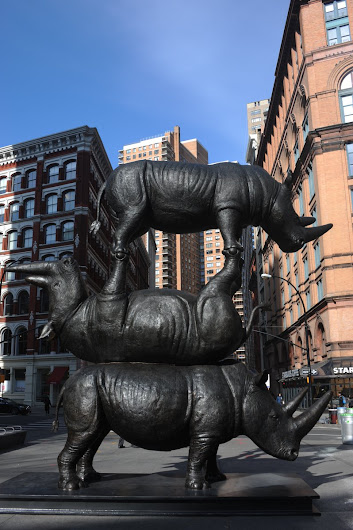 Visitors to the sculpture are encouraged to leave a goodbye message ... with the artists hoping to collect 1 million messages worldwide to "put them toward a petition for approaching governments about eliminating the demand for rhino horns through education."

And as Patch noted in its coverage:

The artists partnered with app developers at INDE to create an informative, augmented reality experience to accompany the statue. The app allows smartphone users to see a life-size, augmented reality version of one of the three last white rhinos. Using the app, you can watch a rhino walk around and meander among the tourists and pedestrians on Astor Place.

The sculpture will remain here through at least May. You can read more about the project here.

Meanwhile, at New York magazine, Jerry Saltz weighed in with some thoughts on "The Last Three" ...

It is an ugly, bathos-filled folly that proves my adage that 95 percent of all public sculpture is crap. Thank goodness this crap is only temporary.

This surreal-ish kitsch monstrosity is a stack of the last three northern white rhinos on Earth. The bottom one is standing with the next one resting on it, back to back — why? — facing up, and then supports the third one on its feet. It’s like a Vegas acrobatic act.

We must accept that hating this work is not dissing the cause. Not liking the sculpture is to show the cause the deep respect it deserves and not selling it out to gaudy artsy spectacle. As an art critic, I also feel compelled to add that if you like the sculpture, I’m afraid it means that you have pretty bad taste.

Previously on EV Grieve:
A sneak preview of the world's largest rhino sculpture, coming to Astor Place early next year

The rhinos have arrived on Astor Place
Posted by Grieve at 7:41 PM

Today, art is considered content. If it fills space it's art. WELL IT FILLS SPACE....

Very Trumpian,except it is not called The Trump Rhinos.

I thought it very dramatic and appealing as a sculpture, and it got me thinking about the rhinos, so I don't have a problem with the work.

When I was in art college there was always at least on fellow student who would bring photographs of "bag ladies" to a class critique. It made them more sensitive and better artist they imagined while in reality it was exploitive and did nothing to help the bag ladies.

They cut an enormous red ribbon, really? How precious.

I like the sculpture because it makes mammals look stupid, a worthy cause.

I'm also applying for a Soros Grant to fund a vandalism kit.

Can we take this sculpture down now?

Sudan, the world’s last male northern white rhino, has died, putting his species on the brink of extinction
The species can now only be saved by in vitro fertilization, a costly and unprecedented intervention.