After nearly 26 years, Three of Cups is closing on 1st Avenue; Emmy Squared arriving next? 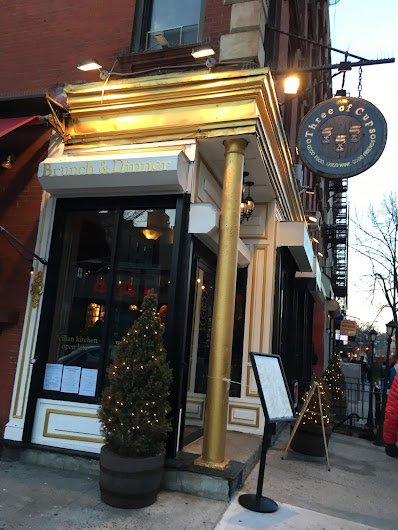 Anthony Barile, an owner of Three of Cups, which opened on First Avenue at Fifth Street in December 1992, announced on Facebook last night that the pizzeria and Italian restaurant — along with the Three of Cups Lounge — will close after service on April 1.

The day has come where I must share the sad news that Three of Cups will be closing. I’ve thought often about what I might say when this day came and each time I pushed the thought from my head, but here we are.

The reasons are many that we are at this moment, with all of them meaning that I can’t sustain it any longer. It’s the end of the longest thing I’ve continuously been involved with, almost 1/2 my life, nearly 26 years.

My wife worked here before we were married, my children grew up playing here and my son has worked here with me for the last two years. Three of Cups is a big part of our home and lives.

I am thankful to all the fine people that have worked with us to make it happen everyday, without them it never would have. There are too many to list here, but if you know Three of Cups, you know them too. I wish them the best of what life has to offer.

Our customers are the best, so many loyal souls over so many years. Without you we’re obviously not here all these years. Our staff and customers made Three of Cups what it was.

Three of Cups has always been a home for the unique souls of the East Village.

I’ve learned so much from all these people; staff and customers alike, and I’m grateful I had that opportunity.

So many fun, heartwarming and crazy times shared with friends, family, customers and staff! It’s the end of an era and it will all be greatly missed.

I want to acknowledge my long time partner and dear friend, Santo Fazio who all those years ago brought me along for this crazy trip, I love him for that.

Please come by before we close the doors for good, we’ll share a drink and toast to the good times. Our last day will be Sunday, April 1.

Last June, Three of Cups posted news that they had secured a new lease.

Meanwhile, on Monday, the owners of Emmy Squared were on the CB3-SLA docket for a new liquor license for the Three of Cups space. (A PDF of their questionnaire is here.) A CB3 flyer had been posted in the window... 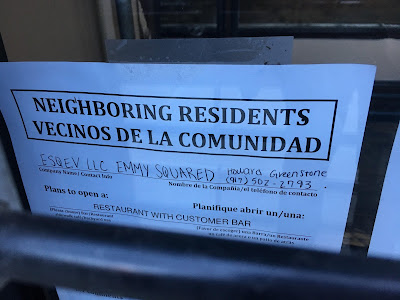 Eater reported in December that Emmy Squared, the Williamsburg-based restaurant serving burgers and Detroit-style pizza, was taking over the GG's space on Fifth Street between Avenue A and Avenue B. It's not clear if the Emmy team will still be taking this space, which remains dormant since GG's closed on Dec. 23.

Back on First Avenue, the retail condominium space at No. 83-85 had been on the market for $5.4 million.

That’s pretty much the final nail in the coffin for the East Village, as I’ve known it.

Anyone remember long-time occupant Small's Pharmacy on the site replaced by a soup joint before Cups?

noooooooooo!!! so many good times in their red-lit basement, fortified by icy cans of beer and the loud sweet sounds of hard rock and glam stompers! RIP!!

What a loss. We're gonna miss you a great deal, Anthony.

I'm really sorry to hear this. I've lived on the block for many years and Three of Cups has always been a reliable place for a relaxed, affordable and tasty meal. I wish the staff well and hope what ever replaces ToC will strive to be as good.

It's a really sad day.

This and Ciao For Now just closed. How many family-owned businesses are left? B&H is one that comes to mind -- but we almost lost them to the explosion. Any others?

I've been cooking a lot more lately as there are just not any good, comfortable, family-style restaurants around anymore.

Aww This is very sad news "Cups" is a much beloved local watering hole a favorite hang for many of my fiends. The last dinner I enjoyed there was magical, seated in the front area, we enjoyed a superb dinner in a room beautifully decorated. The interiors upstairs and downstairs are enchanting Cups is a great establishment, beloved by the community and gave character to the neighborhood. It will be missed terribly

Awww...shit! Been going there since they first opened. :(

My last few visits here were sub-par. I had to send my nearly raw piece of salmon back — twice. Another time I sat at the bar. The bartender was doing the liquor inventory with a full bar of patrons behind him. Four people ended up walking out after a long wait.

This and Ciao For Now just closed. How many family-owned businesses are left? B&H is one that comes to mind -- but we almost lost them to the explosion. Any others?

Angelica's Kitchen closed for the same reason many of them are citing—they just couldn't make the numbers work from week to week.

Many happy memories come to mind every time I walk by that place. I'm very sorry to see it disappear. The memories will live on. Best of luck to Cal and the other staff.

Damn. I walked by there a few weeks ago after moving out of the neighborhood 4 years ago and was so happy to still see it open. What great spot.

I don't say this often. But they had a great gluten free pizza crust.

"Parting is such sweet sorrow..."

We're so saddened! "Cups" was a go to place for us...Saturday night dinners, birthdays, family dinners, my retirement party...we spend lots of time at this wonderful neighborhood restaurant. Thank you, Anthony, for making so many happy~~ We will so miss you. Sending you and your family warm loving wishes,

1) Many wonderful meals there. Lunch, dinner, brunch...always great. And many fun nights in the lounge. An East Village classic. Kudos to all involved on a great run. Best of luck on future endeavors.

3) Wasn't there a big sword on the wall in the main dining room? What's happening with that?