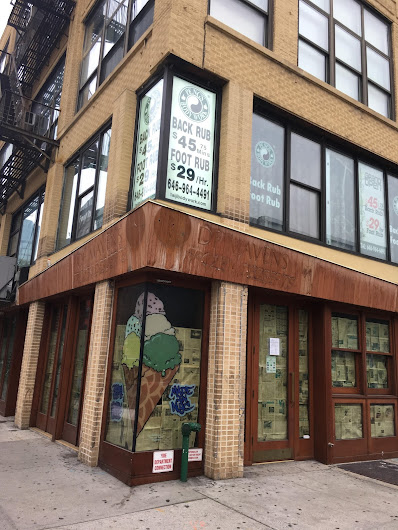 As a growing number of vacant storefronts dot the city, Mayor Bill de Blasio on Friday said he wants to penalize landlords who leave the shopfronts sitting empty.

“I am very interested in fighting for a vacancy fee or a vacancy tax that would penalize landlords who leave their storefronts vacant for long periods of time in neighborhoods because they are looking for some top-dollar rent but they blight neighborhoods by doing it,” he said on WNYC. “That is something we could get done through Albany.”

The borough’s overall vacancy rates doubled from 2.1 percent to 4.2 percent between 2012 and 2017, according to a City Council report published in December. The report blamed landlords charging skyrocketing rents right as brick-and-mortar retailers are struggling with growing online competition.

10 years too late but at least it's something.

"dot the city"
WTF is this writer smoking??
The amount of vacant store fronts is staggering.
The amount of revenue lost in taxes from sales and income taxes and the overall economic decline is most like incalculable.
But Khuomo and Bozo battle like children and want yo further decimate the city while the public sits by and does nothing
things have got to change
it might be too late already

Tenants are progressively becoming more and more rent poor. So even if a store pays reasonable rent there's no guarantee that there will be any customers. Tenants in my building are buying toilet paper and paper towels on line because they're cheaper than a local grocery. Not a good sign. What's going to happen when Amazon and Walmart start delivering groceries in Manhattan?

Mayor Big Slow finally takes action. I hope he finds sudden interest in punitive measures for pay to play political favors and the use of luxury condos as tax shelters by foreign and domestic oligarchs, stemming the reckless rubber stamping approvals of building air rights and movie shoots, and the still continuing harassment by construction in buildings with rent regulated tenants.

This is completely disingenuous on DeBlasio’s part. I heard him on NPR about a year ago talking about this very topic and he said he hadn’t seen any model for commercial rent control in any city that he thought would work. He sounded like he was just throwing up his hands and had given up on the issue. Now all of a sudden he wants to do this? I doubt he’ll get anywhere with it. He’s just trying to clean up is very bad image when it comes to protecting small businesses. Meanwhile parts of the Upper West Side and SoHo are ghost towns especially at night. W. 8th St. used to be downright scary at night before they rented a few of those doors out. And we know about the situation in the East Village and especially that St. Mark’s Place corner where DF Mavens used to be. New York has vanished.

About time De Blasio had a good idea.

Tony Danza brought this subject up exactly a year ago to Mayor Big Slow when he called WNYC and all the mayor wanted to talk about was cheese and Tony was having none of that:

Ummm, what is the incentive for keeping a storefront vacant? Maybe we should get rid of any economically unsound reward for keeping a vacant storefront untended for an extended period of time.

Maybe the City should be thinking about giving small store owners are break on startup costs and taxes for a five year period - the period in which a ndew store will fail if a new store is going to fail. Then they could afford the higher rents. Store owners would be happier. Landlords with store front spaces would be happier. Win-Win. Oh yeah...City loses....revenues....What? Uh uh...no revenues from an empty space.

The demise of retail shops is the reason for much excess storefront real estate. It would be nice if there was a clean solution but there isn't and Amazon is a big part of the cause. You cannot compare web traffic with foot traffic. Restaurants, hairdressers, nail salons, celphone fixit and cannabis shops are likely survivors while toys stores, show stores, clothing stores, electronics, camera and home item stores are getting killed. Fines are a way to get owners to lower the rent, in hope that marginal retailers can hang on. It makes sense.

Does anyone have a link to the December 2017 City Council Report that is quoted in the article and in other places? Can't seem to find it anywhere.