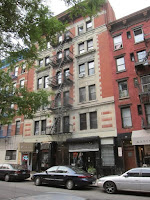 The Associated Press reported yesterday that Jared Kushner’s Kushner Cos. routinely filed false paperwork with the city declaring that it had zero rent-regulated tenants in buildings it owns when, in fact, they had hundreds.

A tenants' right watchdog group, Housing Rights Initiative, compiled the work-permit application documents and shared them with the AP.

In addition, the AP points out what has been previously covered in other outlets: In Kushner buildings across the city, records show frequent complaints about construction going on early in the morning or late at night against the rules, improper or illegal construction, and work without a permit.

At a six-story walk-up in Manhattan’s East Village that was once home to the Beat poet Allen Ginsberg, the Kushner Cos. filed an application to begin construction in late 2013 that, again, listed zero rent-regulated tenants. Tax records a few months later showed seven rent-regulated units.

"All of a sudden, there was drilling, drilling. ... You heard the drilling in the middle of night," said one of the rent-regulated tenants, Mary Ann Siwek, 67, who lives on Social Security payments and odd jobs. "There were rats coming in from the abandoned building next door. The hallways were always filled with lumber and sawdust and plaster."

A knock on the door came a few weeks later, and an offer of at least $10,000 if she agreed to leave the building.

"I know it's pretty horrible, but we can help you get out," Siwek recalls the man saying. "We can offer you money."

Siwek turned down the cash and sued instead. She said she won a year's worth of free rent and a new refrigerator.

For their part, Kushner Cos. told the AP in a statement that it outsources the work-permit preparation to third parties that are reviewed by independent counsel, and "if mistakes or violations are identified, corrective action is taken immediately." The statement added: "Kushner would never deny any tenant their due-process rights."

Kushner currently serves as an adviser to his father-in-law, President Trump.

“As the representative of a district with one of the highest rates of Kushner-owned property in the city, I am outraged to see the Trump family’s continued alleged criminal abuse of working-class New Yorkers. These alleged false work permits may come from the biggest name in corrupt real estate in this city, but Kushner is certainly not the first to allegedly commit this kind of fraud. The lax enforcement by DOB and HPD of these illegal filings has allowed not only Kushner, but also names like Croman, Tolidano, and countless other bad actors to plague the residents of my district for decades with clear-faced harassment disguised as permitted construction.

I have fought alongside activists for hundreds of residents who have lost their lifelong homes to the Kushner family’s harassment, and the city must take action to punish those responsible. I look forward to participating in the Council’s investigation into Kushner Cos., and I expect to hear from city agencies as to why this abuse of power continued for so long.”

According to reports, AG Eric Schneiderman will meet with tenant representatives affected by the alleged tactics of Kushner Cos.

AG Schneiderman should draw up a warrant for that scrawny weasel's arrest. Although the city is complicit for letting him get away with his Croman imitation tactics.

Outsourcing? So now Jared Kushner outsources the truth as well. Give me a break. Every time Jared Kushner gets caught not filling out official government forms truthfully, he blames someone else for the error. He’s done the same thing on his White House security clearance forms over and over again, from omitting meetings ith Russians to forgetting to disclose hundreds of businesses and investments he still owns. And yet he keeps saying it's someone else’s fault. Why is it no surprise he claims the same thing when it came to his unethical handling of rent stabilized apartments? And where are DeBlasio and Cy Vance while landlords like Kushner continue to game the system? If Democrats won’t stop this Kleptocracy, who will?

So who hired this out-sourced company that does
not know how to fill out forms correctly ?

Not sure how this is different from other vulture real-estate companies, but if external politics can help shine a light on these practices, then good.

It's the business of business in NYC. It's all good until you're caught. Money makes the world go round...like this.

I hope this gets nation press attention, we've heard about his illegal practices from our neighbors for years now I'm not surprised.

If Mayor Bill really wants to increase housing stock then he should investigate the illegal activities of all landlords in the city from forced tenant evictions to illegal renovations(including adding illegal bedrooms). But oh, I forgot... YOU ARE IN THEIR POCKETS ALONG WITH ALL OF THE OTHER ONE-PARTY RULE ELECTED OFFICIALS.

I just donated $100 to https://housingrightsny.org they seemed to have draw some blood. Do consider joining me.

Trust me: I lived through it. Kushner is a soulless animal.

Kushner is a human being, you arrogant endotherm.

Own it, and stop blaming us innocent animals.

Real estate is a dirty little business. There are always bad players, even in premium properties. Count Jared Kusher among them.

If Croman can be jailed, why not Kushner?

Croman got jailed because he stole from the banks lending to him. Nobody fucks with the banks in this country, just taxpaying constituents.

Justice will catch up to Kushner. It's like instead of learning from his dad's heinous decisions that imprisoned him, he thought he can outdo him and get away with it. And for years and enabled by mayoral and DOB incompetence and indifference he did. But he will ultimately get pounced by the feds for his amateurish seditious machinations he committed as an "advisor" in the campaign and in the white house

Kushner is a bad guy. Plain and simple. I own a thriving business on Avenue A. The kind of place brokers list in the Time's or on Craigslist when shopping an EV apartment. Always paid my rent on time. Always been an ideal tenant. The day this guy bought my building , he had his lawyers go though my lease nan attempt to come up with ways to evict me. Lawyers got involved. I was told that even if I won the battle I would still lose the war because I would go broke paying legal fees. Threats to call in favors from steady customers of mine who work for the Times and NY 1 coupled with the fact that I was not going to back down forced the spoiled brat to walk away. I was then offered an ' off the record buyout.' When I asked why eliminating my business was such a priority , I was told because I was 'under market.' Veiled threats along the lines of ' You should except this offer because it may make a lot of sense to you one day,' were made. I learned quickly what that meant. It meant if the guy upstairs left his bathtub running all day and blew out my ceiling I was on my own. The guy is bad news. It's not debatable. He's only backed off recently because he's been instructed not to do anything to make him or Donny Bankrupt bad in the press.