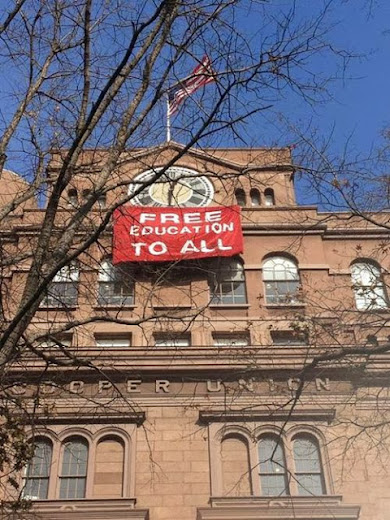 Under a plan approved by the board of trustees late Wednesday, Cooper Union would begin increasing tuition scholarships in two years, and aim to provide full tuition in 10. The additional outlay would be offset by unspecified cuts in expenses, more fund-raising and “other revenue increases necessary,” the college said in a statement.

“If we exceed the financial targets in any given year, we may be able to accelerate the plan; if we don’t meet the targets for any number of reasons, such as an economic downturn, we have built-in guardrails that allow us to slow the plan if necessary,” said Laura Sparks, Cooper Union’s president, who took office in January 2017.

Cooper Union started to charge students tuition in 2014 — for the first time in its 150-year-history.

This piece at Hyperallergic outlines the subsequent drama surrounding that decision.

Previously on EV Grieve:
What went wrong at Cooper Union

Report: Cooper Union Board says no to proposal that would keep the school tuition-free

Here's video of Cooper Union students entering the president's office this morning
Posted by Grieve at 4:01 AM

Hey, why not raise the rent on the land the Death Star no sits, or did the fools sell that?

This is NYC. Nothing is for free. Come on people. The gig is up.

@anon 8:57 - you might want to look up the history of Cooper Union before you opine.

It was established with the purpose of providing a free education to gifted students, and did a splendid job at that until a stupid and corrupt board of trustees started stuffing some of the money in their own pockets and badly mismanaged the rest.

If the new board can fix the damage, and return the institution to its long-time mission, good for them.

The school OWNS and leases the land which the Chrysler building stands. The income from that lease has sustained the free tuition since foreever. If I'm not mistake the board used that property as collateral to build the new "steel grate" building on 3rd at 7th street. Financial problems soon followed after a risky Wall Street type of maneuver backfired.

In the academic world today, free mens mediocre as in Cooper Mediocre Union.

When people start spouting trash talk about Cooper, I always ask, "Did you go there?" That shuts them up for a minute.

Just to get our history right - the college hardly earned anything from the Chrysler Building land until after the skyscraper was built and after the Great Depression ended, and even then, it provided only half of its operating costs. That's not forever. Peter Cooper himself funded the school while he was alive, then his son, son-in-law, and Andrew Carnegie provided funds, then after his son-in-law (Abram Hewitt) died the robber barons created a whole bunch of endowments that allowed the Hewitt Building to be built and kept the school funded through WWI and WWII. As late as the 1980's, the Chrysler Building continued to provide only half of the school's operating funds. That balance started to shift as Cooper took out loans to gut renovate the Foundation Building, build the Student Residence, and the New Academic Building, and dip into its cash endowment. For financial sustainability, the college needs to build back its cash endowment, to the tune of an additional $250 million, while wiping two large loans off of its books.