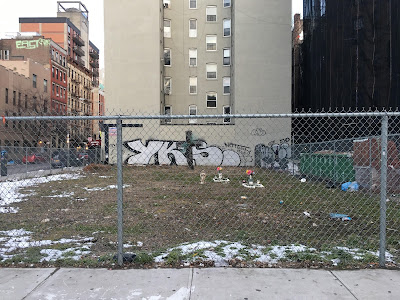 • February 2016 — Manhattan DA Cyrus Vance's office charges landlord Maria Hrynenko and four others with manslaughter and negligent homicide for their alleged role in the blast that killed two men and injured more than a dozen other people. There buildings — 119, 121 and 123 Second Ave. — were also destroyed.

Vance's office charged Hrynenko and her son, Michael Jr. Hrynenko, along with contractor Dilber Kukic and plumber Jerry Ioannidis with manslaughter in the second degree, criminally negligent homicide and assault in the second degree, among other charges. (The final defendant, licensed plumber Andrew Trombettas, was charged with offering a false instrument​,​ for allegedly lending his name and license number to paperwork.)

The five were accused of installing an illegal gas system, which they hid from inspectors, at 119 and 121 Second Ave. All five pleaded not guilty.

• June 2017 — Hrynenko files a lawsuit, claiming that her management company was "careless and reckless" in its work. In the spring of 2015, as investigators focused on her actions, a lawyer for Hrynenko said that Con Edison bore responsibility for not shutting off the gas during the visit to the property earlier that day.

• June 2017 — Nexus pays $9.15 million for the empty lots at No. 119 and 121 between Seventh Street and St. Mark's Place. Public records show that Maria Hrynenko's companies — MAH Realty and Kiev Realty — were the sellers.

• August 2017 — An obituary at the Pizzi Funeral Home website states that Michael Hrynenko Jr. died on Aug. 25. He was 31. A cause of death was not disclosed.

• October 2017 — City officials unveil the new street blades that co-name the northwest corner of Second Avenue and Seventh Street after Moises Locón, 27, and Nicholas Figueroa, 23, who died in the gas explosion.

Hrynenko was expected to be back in court this past Friday. Records show that Hrynenko and the other accused have appeared in New York County Criminal Court 12 times since February 2016 with the same outcome — "adjourned/bail continued."
Posted by Grieve at 9:00 AM

I cannot believe it's been three years :(

I've heard rumors of making that area a memorial park and sanctuary. I think its a good idea. Its looks sad being empty for this long.

Meanwhile, it appears Hrynenko plans to "wait out" the justice system. Maybe she hopes she can be elsewhere (or dead) by the time she is ever called to account for this deathtrap she owned. Once again, justice delayed is justice denied.

Where is de Blasio? What a disgrace.

Thanks to Nexus, it looks like there's at least 9 million dollars for the Figueroa and Locon families to share. I sincerely hope they the go after the (surviving) Hrynenkos and the whole Kiev crew for every last penny.

Can’t believe it’s so long. So sad that it will be turned into another piece of real estate bling. I’m glad I moved (after 45 years in the hood).

DeBlasio does nothing unless it lines his pockets.

Has anyone confirmed that that piece of garbage really died?

I'm curious what DiBlasio is supposed to be doing that would make the posters happy?

I'm no de Blasio fan, but through what legal means is the Mayor of NYC supposed to go through to seize this land? Please be specific and cite examples.