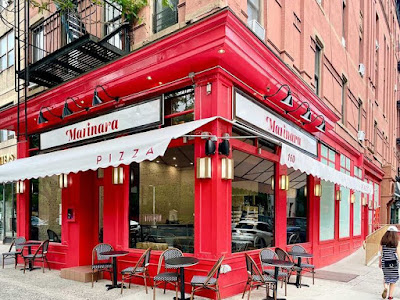 As we've been reporting (like here and here), Marinara Pizza is coming to the northeast corner of Second Avenue at 10th Street.
And yesterday was the pizzeria's opening day (thanks to Nick Solares for the pic!) at 160 Second Ave.
As noted before: An EVG reader told us that their most popular slice is the MVP, which features stripes of marinara sauce, vodka sauce and pesto on a square pie (the pic is from the Marinara social media) ... 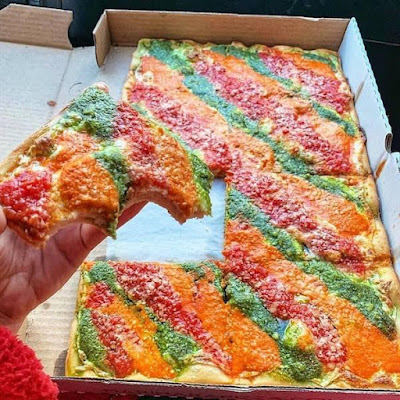 For now, their hours are daily from 11 a.m. to 9 p.m. Find the menu here.
This is the fifth outpost for Marinara, which has locations on the UES, UWS, Midtown East and Park Avenue South.
H/T Steven
Posted by Grieve at 4:50 AM

$14 for the heroes is a bit pricey. I miss Nolita.

@10:00 am thank you, will give them a try. Heard they have a double stack pizza. Which is two pies stack on top of each other.

Looks and sounds delicious, will try this.

That MVP looks really good, can I add a ripple of garlic and pepperoni?

East Village Pizza are above average priced themselves

It's only Baker's Pizza for me in the EV.

I've tried the other pizza shops in the area and I'm sticking with Baker's.