Read this if you parked along Avenue C right now 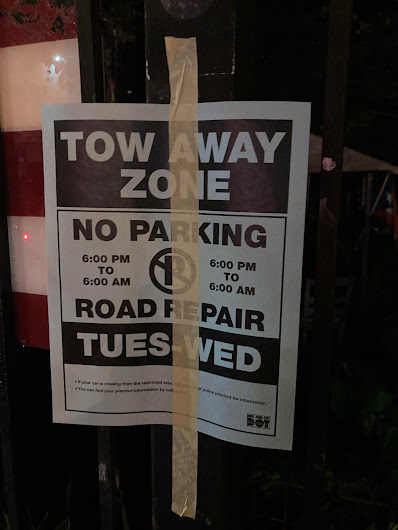 An EVG reader shared this following...

We parked our car on Avenue C between Fourth and Fifth this weekend. We should not have had to move it until street cleaning on Friday. We are vigilant about checking for parking signs and warnings, hate tickets. We were good to go.
Yesterday afternoon I even went to the car to grab something — everything still fine. Last night around 10 I went to walk the dog and saw massive road work being done all along Avenue C. They were towing cars out like it was a parade. I managed to run home and grab my keys to move my car JUST in time.
Usually, when this happens, [the city] places signs up at least a day before to warn people. But for last night's work, this was not the case. Here's a pic [above!] of a paper sign closest to my car — it's still crisp and dry meaning it wasn’t put up until AFTER the rain late yesterday afternoon.

How does the city get away with acting like this? I can’t imagine how many poor people came out to their cars this morning to find them missing. There were SO many cars to be towed because NO ONE had any idea because the city gave NO notice this would happen. Outrageous.

And the work is set to happen again tonight.

But today the signs were all ripped down again. So people may have parked there today and will be towed tonight. Would be great to warn them.

Avenue A last night tow trucks all over around 9 pm

Having a car in the city is painful

I saw them towing a ton of cars on C and 9th around 11pm.

Signs showed up Tuesday evening on every building's front door on C from 10th St and up north, for night work on Wednesday and Thursday.
Still all parking spots were occupied Wednesday night...

Signs for work south didn’t show up till literally an hour or so before work. And they were all ripped down the following day before more work to be done.

The city does not give two shits about us at all. Good luck finding where your car is

Years ago, when I had a car in the city, I went to move my car and it was gone. I looked down and saw that the road had been recently paved and found a torn down paper sign on the ground above moving cars (which was definitely not posted early enough for me to know).

When I called the number to find out where they had moved my car to, they couldn't find my car in the system. Turns out, they put in the wrong license plate number. Probably intentionally as they illegally parked it in the left-turn lane on 2nd Ave right as you get to Houston (across from the old Mars Bar). I had probably 10 tickets on it - some of them weren't even for my car.

The whole thing was crazy and shady AF - they knew they parked my car where it didn't belong and effed up the license plate number on purpose (IMO). I did fight all the tickets and won, but WTF.

Sadly if they are b building that bike lane it's going to give nowhere to park on that Avenue. I wish they'd implement these things practically. There is already a protected lane on first ave. Vehicles need a place to pull over or park obviously. Such a different tool than a bike.

Actually vehicles will have space to pull over to drop off and pick up passengers or for delivery trucks to operate without blocking the moving lane. It’s just that there won’t be space to store vehicles for free .

I live on C and 7th. This noise and mayhem continued until about 3 am or with bright lights all over. Crazy! Why not do it during the day? Does they realize most of us have jobs and appointments during the morning and afternoon and need our rest at night like most normal human beings? I had to go out today and buy earplugs. The city doesn't give two fucks about us even when we pay a lot in rent and taxes. Oh well. I guess we will have to suck it up. Hope this isn't a long term arrangement.

anon 1:45 what're you talking about store vehicles for free? The city barely has municipal parking, private spots are a fortune. Respect others and their lives. Parking a vehicle in a shared space is not "storage", what're you talking about? I agree if a car was just stored there and never moved it shouldn't be allowed but that makes no sense. They need somewhere to go, they're a vital tool.

I experienced a similar situation when I lived in Brooklyn in the '90s. Parked my car in a spot that was supposedly good for a week, with no indication otherwise. When I went to move it finally I found that the city was doing roadwork and my beloved Dodge Charger had been somehow (forklift?) relocated onto the sidewalk. I guess I was lucky they didn't tow it away, but I was pretty pissed off to see a ticket for parking on the sidewalk shoved under my windshield wiper.

..the whole delivery thing is out of control - we're not getting pizza or Chinese delivered from the corner place - it just assumes they use our sidewalks and streets as their loading docks and staging areas and drop off zones - the new app based delivery goal is that you get EVERYTHING delivered - according to the brochure stuffed in my mailbox this new local co will deliver a banana for 19 cents with no delivery charge or minimum - you will keep no store of food at home. For your convenience. But if that catches on, that will mean 100's of more delivery trips per block per day!

True. There are too many deliveries because they are not priced correctly: when delivery people will be paid salaries, living wages, the whole app based/ gig workers tips based system will disappear. It can only exist on theft and exploitation of workers.

So our car was parked on 4th and C and we just went through 3 hours of detective work to find our car, which was towed and parked crooked on 14th between B and C. If you need to find your car, the 2 police precincts (8th/C, 5th/1st) & 911 have no idea about your car, the numbers listed on the papers posted on the towed cars also do not work, go to the NYCDOT website and under Contact, call the Manhattan Borough Commissioner Ed Pincar Jr number: 212-839-6210 and a nice lady was able to tell us the EXACT location of the car. Good luck.

and 2 weeks later the road still HAS NOT BEEN PAVED! The dust is terrible and keeping people masked while walking up Ave C.