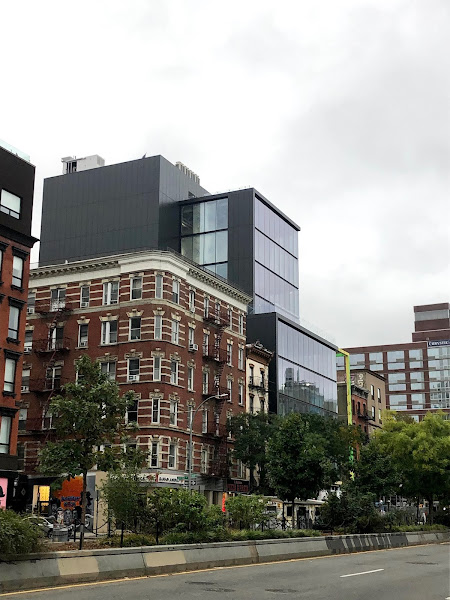 After a slow reveal of its façade late this past summer, we now have a full view of the new 9-floor office building at 141 E. Houston St. ... 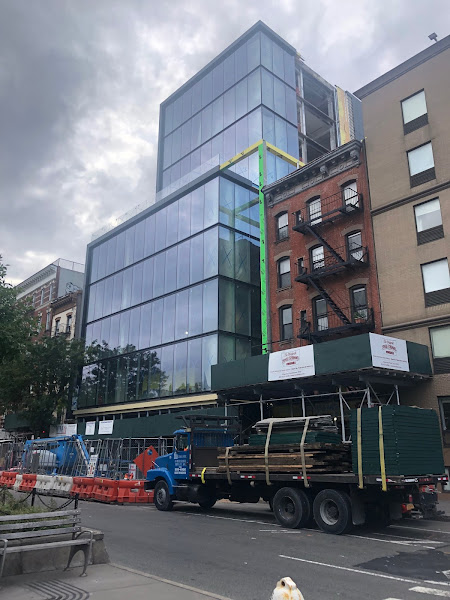 Workers removed the remainder of the scaffolding and construction netting this past week on the 65,000-square-foot structure between Eldridge and Forsyth... showing off the floor-to-ceiling glass wall facing the street... A narrow alleyway/courtyard separates the new building and No. 137 to the west —the longtime home of Yonah Schimmel, still obscured by a sidewalk bridge).
According to the listing for the two retail spaces at 141 E. Houston St., this corridor is Sunshine Alley, perhaps a lame nod to the Sunshine Cinema (RIP 2018) that once stood here. (Previous marketing materials called the courtyard Houston Alley.)
The listing notes a "built-in capacity for a commercial kitchen with venting to the roof," so a food-drinks operation is within the realm of possibilities for a new tenant.
One more thing about the listing: it names several of 141's "neighbors," some obvious picks such as Russ & Daughters and Katz's ... as well as some more far-flung spots like Milk Bar (perhaps the mini location on Mott Street?) Not mentioned: The circa-1910 Yonah Schimmel right next door... 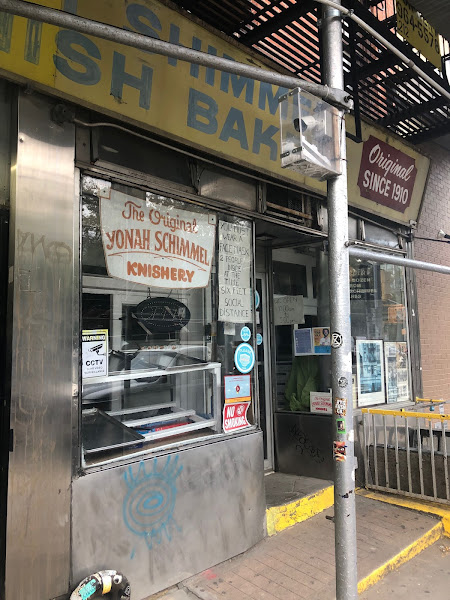 Stunning! The vertical green thing is a nice splash of color denoting our 'green' commitment to mother earth and all its inhabitants, I think.

So boring. Will anyone every be able to distinguish among all these lookalike glass boxes? I wonder if all the flat, hard surfaces amplify sound instead of breaking it up.

Another new building that has zero relationship to the rest of the LES.

This reminds me I need a knish.

This is the type of building I would expect to find on the outskirts of an airport.

Imagine if you were responsible for this building. When someone on Thanksgiving asks you what you do for a living, do you say "architect" with a straight face or give a 2 second pause first?

How out of place can you get??? Way to blend into the neighborhood

The building is pretty great for what it is. Simple, minimal buildings of this type have been around for almost a hundred years. High ceilings, flooded with natural light, high end mechanical upgrades. One might like the look of the old brick buildings, as I do, but they they're loaded with lead paint, asbestos, sagging floors, termites and rotten plumbing and electrical systems. Real estate has always been King in NY so anyone shocked by buildings of this type is more than a bit naive.

The other thing is, architects, in reality, have very little to do the the design of the the building's exterior look. The real estate developers dictate to the architect what they want and what their budget is. The architect must work within those limitations. Of course I prefer the old Sunshine but that's not the way things work in NYC.

The Sunshine was a lovely unique building. This screams corporate midtown Ken and Barbie executive lunch.

Because god knows we need another office building since the other ones are so full up these days... And I agree, this building is just another soul crushing corporate midtown dark-box building. A lost opportunity to add to the neighborhood.

A disgrace to competent architects everywhere!!

"Simple, minimal buildings of this type"

To me, that seems like an odd description for this mini death star construction with a lower portion that protrudes like middle aged man belly.

It's not exactly a triumph, but the replacement building on Second Avenue at East 7th shows it's possible to at least go some way to accommodating the local context.

Industrial park, developer grade, late stage predatory capitalism, cheapest construction possible with no commitment to, much less acknowledgement of, the neighborhood. In such a nosy location you would think they would at least try to break up the glass curtain to deflect noise and add a little visual interest. Still do not understand why they did not leave the old facade intact, oh wait, nothing to understand, knock it all down, cheaper that way, profit above all.

This place is so awful. I am sick and will be the rest of my life over this. NYC is dead to me now. This is happening everywhere in town and it is killing New York. We now live in Yuckville.