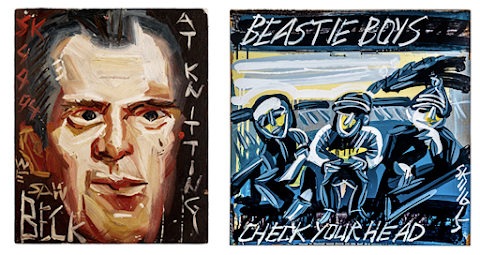 Steve Keene, the prolific Greenpoint-based painter perhaps best known for his 1990s album covers for Pavement and the Silver Jews, among many others, is holding an in-person show for four days only starting Thursday at the Public Access gallery on the Lower East Side.
Details via the EVG inbox ...

Be advised, this is no traditional art gallery show.

Art fans will get the full Steve Keene experience as the "one-man art factory" packs Public Access with dozens, if not hundreds of LP-sized works, all for sale via his custom-made donation box: Hundreds of paintings. For sale. Cheap.

Keene is beloved for his deep ties to the 90s indie rock scene, where he started out selling his album cover homages at merch tables all over NYC, ultimately becoming known as much for his cheery, automated style as for his everyman prices of just $5 - $10 per painting.

The show will feature some advance copies of "The Steve Keene Art Book," the first monograph of his work that's due out on June 14. East Village resident Daniel Efram, a longtime Keene collaborator, is producing the artbook. (Efram has also shared photos with EVG through the years.)
Public Access is at 105 Henry St. near Pike Street. Gallery hours: Thursday 6-8 p.m.; Friday 2-6 p.m.; Saturday-Sunday noon to 6 p.m.
Art by Steve Keene; images courtesy of Daniel Efram
Previously on EV Grieve:
• Behind the first book featuring the work of artist Steve Keene
Posted by Grieve at 12:30 PM