Film notices: Getting down to 'Brass Tactics' 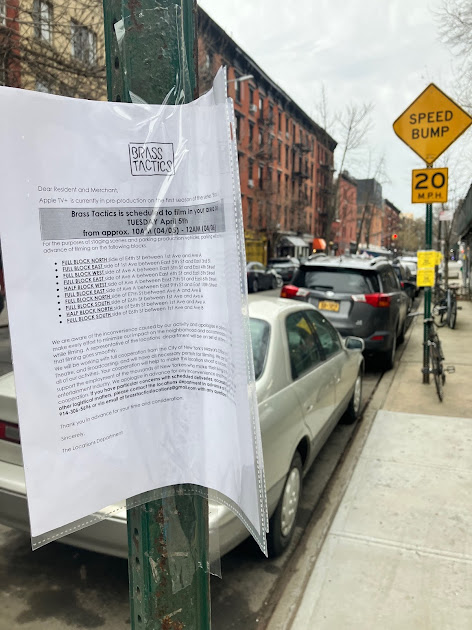 You've likely seen film notices up on various avenues and side streets for an Apple+ series titled — per flyers — "Brassed Tactics," which looks to be a big production.
We've spotted flyers along Avenue A from Third Street to 10th Street... and on Second Avenue from Third Street to Houston for filming on Tuesday and Wednesday... 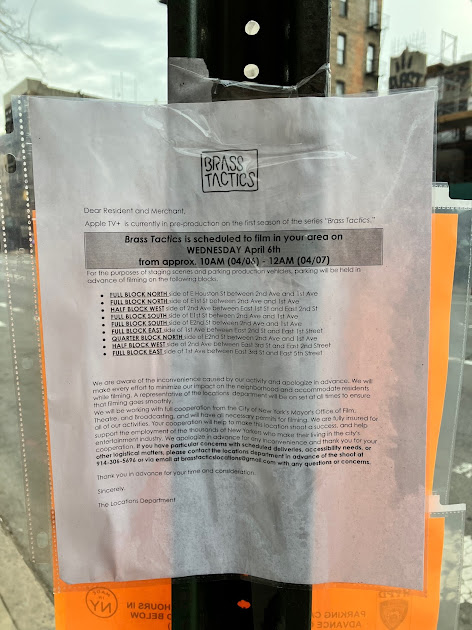 An ad in Backstage describes the production like this:

Roman Candle Casting is seeking talent for "Brass Tactics," a new drama from Apple TV+ set in the year 2002. Talent, aged 18–45, is wanted to portray trendy New York City types, including punks, music geeks, and more. Talent must be available in April for filming in NYC. Pay is $165–$180 per eight hours of work.

The series is "City on Fire." Here's more about it via a recent article at Variety:

The series is based on the book [ed note: which is set in the 1970s] of the same name by Garth Risk Hallberg. In "City on Fire," NYU student Samantha (Sui Wonders) is shot in Central Park on the Fourth of July, 2003. Samantha is alone; there are no witnesses and very little physical evidence. Her friends' band is playing her favorite downtown club but she leaves to meet someone, promising to return. She never does.

As the crime against Samantha is investigated, she's revealed to be the crucial connection between a series of mysterious citywide fires, the downtown music scene, and a wealthy uptown real estate family fraying under the strain of the many secrets they keep.

The cast includes John Cameron Mitchell and Jemima Kirke. "City on Fire" is written and executive produced by Josh Schwartz and Stephanie Savage, whose current credits include the "Gossip Girl" reboot.
Posted by Grieve at 5:00 PM

Email ThisBlogThis!Share to TwitterShare to FacebookShare to Pinterest
Labels: filming in the East Village

'trendy' New York City types..I fit the bill for four of those terms but I FAIL bigly at trendy...What's a non-trender to do?

Trendy punks, no less! I can hear Joe Strummer laughing in his grave.

More insults to resident car owners. Nowhere left to park in the neighborhood and they want to make people move their cars? Outrageous.

Do you think they would want a 63 year old punk rocker?

Their EV and mine differ greatly.

@ 2:19PM no of course not, you're likely ACTUAL punk -- we want clean, bathed, gainfully* employed actors portraying said EV crusties, who the suburban runaway wannabes hung out with by leshko's and odessa after being kicked out of the park by regulars, and being able to afford neither. Cause, well, drugs! (*I mean $180 is like $25/hr with being fed, considering jury duty is only $40/day, not bad, not bad, back then everyone actually sitting there would!)

You are correct. I was a punk rocker from the get-go, and I’m still a punk rocker. A 63 year old punk and proud of it!

Vile film making right in front of where I live on East First...not even a notice in the building ahead of time..