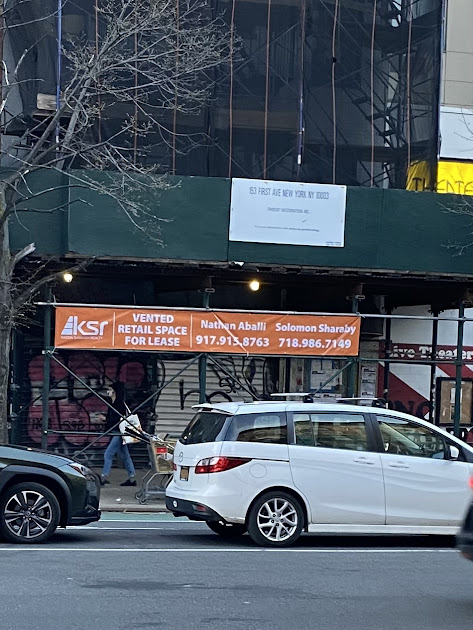 A for-lease banner has arrived outside 153 First Ave. between Ninth Street and 10th Street. (Thanks to Steven for the photo!)
The space, a recent recipient of a gut renovation, is notable for being the home of the first Coyote Ugly, which held forth here with bartop dancing and body shots for 27 years. CU left this address in September 2020 ... for new digs on 14th Street.
The KSR listing notes the CU connection here (but not the asking rent!)... 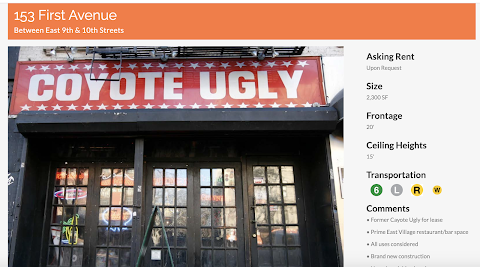 As previously reported, there was a new tenant lined up for No. 153.
Brooklyn Dumpling Shop founder Stratis Morfogen had plans to open a rock club here. (The questionnaire on file at the CB3 website from February listed the establishment's name as E. Village Bar, while the New York Post called it E.VIL Rock Club in an article last fall.)
This concept dates back to 2017 (another flashback here) when E.VIL had designs on 64 Third Ave. (later going to the Ainsworth).
In any event, this application was withdrawn before the CB3-SLA committee meeting, per public records. And now, the space is on the rental market...
Posted by Grieve at 4:49 AM

An empty space covered in scaffolding in nothing to celebrate.

@10:04 maybe not but not having a rock and roll club open in a residential neighborhood certainly is

It is totally something to celebrate that that wretched place is gone, and with it a bit of the booze-dealing in our ‘hood.