We were reading the following at BizBash: 2010 Preview: 10 of New York's Most Anticipated New Venues

8. Trump SoHo New York
The multimillion-dollar hotel project from the Trump Organization has been slowly rising in SoHo and, according to the most recent announcement, will open its doors on February 1. Beyond 391 rooms, the Trump SoHo will house the 190-seat Quattro Gastronomia Italiana, an 11,000-square-foot spa, and three bar and lounge areas. To top it off, SoHi penthouse is available for events of as many as 150, and the third-floor function spaces total more than 10,000 square feet.

So I went to the Trump site to see what was what. (Had already been primed via Curbed's, uh, primer). And, per the Web site, I saw that the hotel is now accepting reservations... And I went ahead and tried to make a reservation for some time next month to see what rooms would cost....and saw that NO ROOMS were available in February. (Those red x's...) 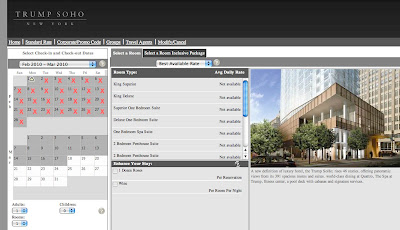 Sold out? Or just not going to be ready? (And I never could make any reservation for any time...And I tried on two different browsers...could have just been me...maybe just a temporary glitch.)

Anyway, here's a look at some screenshots from the site... 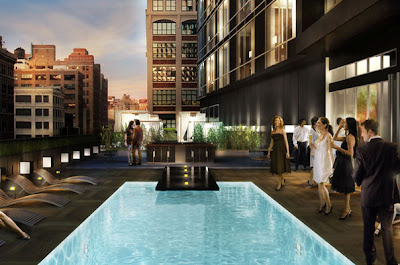 And is this Ivanka walking out of the spa?

And so we don't forget:
High school is rocked by Trump’s pile driving (The Villager)

Trump Soho Is Not an Oxymoron (New York)

Trump and His Critics Square Off in SoHo (City Room)

The Trump SoHo feature: All is well here! (EV Grieve)
Posted by Grieve at 6:49 AM

Email ThisBlogThis!Share to TwitterShare to FacebookShare to Pinterest
Labels: Trumps

I hope it goes tits up so bad I can taste it.