The 13th Step sure to be big with the AA crowd 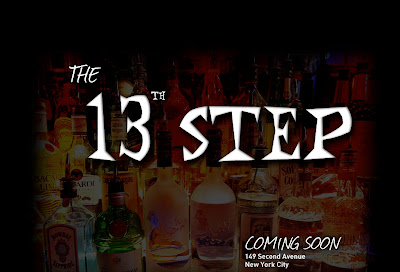 OK, we're all over the arrival of The 13th Step today... Several folks who have been to AA have mentioned how totally inappropriate it is to name a bar The 13th Step.

Thirteenth Step (a.k.a. Thirteenth Stepping):
There is no thirteenth step in the AA program. This term is used as a euphemism for inappropriate sexual advances by a member to a newcomer in AA (such as sponsors toward sponsees). Sponsors ought never be sexually involved with those whom they sponsor. This is why it is usually suggested that (heterosexual) newcomers choose sponsors of the same sex, thereby avoiding the temptation. Also, it is sometimes suggested that newcomers not enter into new relationships for at least a year after getting sober. The reason being that sexual relationships are prone to elicit emotional extremes, making relapse more likely. The term 'thirteenth stepping' is always used in a negative sense.

Oh, wow, how tasteless can you get?

There's a bar in Philly called 12 Steps Down, which they refer to as a "Group Therapy Bar".

Superdive all of the sudden much classier seeming.

Grieve you are so pissing me off with your negative bullshit. I am sure that the AA folks who have inappropriate sex would be offended by your blatant disregard for a place they can call their own.

the logo and picture together look like a bad movie poster.

In the early 80s I attended the AA Group 'Living Now' on St Marks Place. They had many meetings throughout the day and at times it looked like a pick up place to meet a date because that's what it had become. I got out of there after about a year and concentrated on my writing...That's what got me sober not no AA bullshit.

Is it just me or is this culture turning to booze for everything???

At the risk of my own anonymity, it's kind of funny. People need to lighten up.

Anyone who uses the word "sponsee" deserves to be swatted.

I really fail to see the problem with the name: AA'ers will not (or should not) be going in here. Will the presence of a bar ironically referencing The Big Book or AA-babble really cause a sober person to go off the wagon or take the supposed 13th Step? The people that I know who are most successful in their sobriety are the ones with a sense of humor about it, who can laugh at themselves and at what they must do to maintain their abstinence. As Tom said: lighten up!

Who is the idiot that came up with this stupid name? Tasteless. Community board should have not permitted, imo. Only thing as bad would be, "Under 21".

I'm in AA and I think this is funny and clever. Bars are always coming and going so an interesting name always helps. Most AAs I know don't give a flip about how AA is viewed externally anyway. I know I don't.

I find it very interesting that AA has defined the "13th step" in this way -- essentially refusing any outsiders from interposing their concepts as a epilogue to the 12 steps.

In all truth, there is a 13th step, it is called a "clairvoyant program." At least that is what people joked about in the 70's.