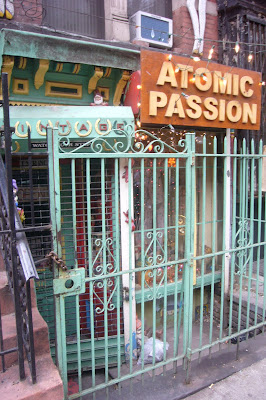 The Web site for Dirt Candy on East Ninth Street brings the news that its neighbor, Atomic Passion, has closed after 17 years.

They just couldn’t make the numbers work anymore. We all know that life isn’t fair, and anyone who expects the good guys to win is living in a dream world. But it’s a loss to the block for Atomic Passion to go, and losing my neighbor makes me feel like it’s not Atomic Passion that’s wrong here, it’s the world where their numbers aren’t the ones that work. Most people didn’t notice Atomic Passion close, but if you were on East Ninth Street last week you would have seen part of the city die. Because when Atomic Passion closed, New York City became just that much colder, just that much of a tougher place to live.

I learned of the news via Jeremiah. He has more on it here. Terry Richardson wrote about it here.

I just read it for the articles.

It seems that you've got to be selling liquor by the gallon these days in order to pay an East Village rent.

This news depresses me to no end.

not surprising, but still very sad. some of my early neighborhood memories are poking around in that shop.

it's friday night, and i just walked home from my old apt on 2nd av & 9th st to 6th & B, and the 'hood is completely and utterly infested. now i really know what "disenfranchised" means.