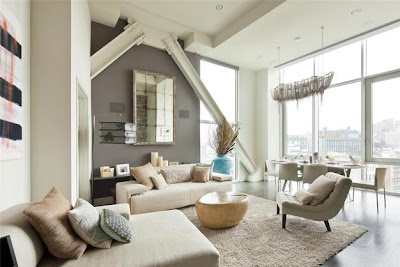 Late last September, we learned that Grammy Award-winner John Legend was selling his two-bedroom condo at 52E4 — the 15 stories of condo on the Bowery and East Fourth Street — for $2.95 million.

Despite the celebrity connection and model-in-underwear-photoshoot cachet, the place is still on the market. But! Last week, the price dropped by $55,000 — or a whole 2 percent ... and it now sits at $2.895 million, according to Streeteasy.

Why just 2 percent? As Curbed pointed out in November, Legend's downstairs neighbor put nearly an identical unit on the market for $2.9 million — nearly $50k less, uh, duh. (The neighbor's unit appears to be off the market for now, though there isn't any sales info.)

Perhaps there's something else keeping away buyers ... like the 7-Eleven on the ground floor or fear of the French hotel coming (probably) some day to the corner of East Third Street ...
Posted by Grieve at 6:46 AM