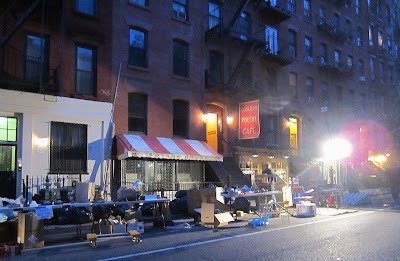 Several tipsters were surprised to see the sudden arrival late yesterday of signage for something called "Gaslight Poetry Club" on East Ninth Street between Avenue A and First Avenue.

"I don't like the look of this at all," confided one tipster. "Anything with 'gas' in the name sounds dangerous, like gasoline or gastritis."

Another resident wondered what the arrival of poets might do to property values.

We checked with the CB3, the State Liquor Authority and the DOB and couldn't find any permits for the establishment.

The proprietor of Gaslight, who declined to give his name, told us that his cafe would welcome "dope addicts, free-love cultists — anyone who loathes hypocrisy."

The work is all part of the pre-production for tomorrow's shoot for the new Cohen Brothers movie, "Inside Llewyn Davis." Parts of East Ninth Street will be dressed to look more in tune with the film's 1960s setting. The film follows a protagonist loosely based on singer Dave Van Ronk, a friend of Bob Dylan’s. Oscar Isaac stars as the title character while Justin Timberlake co-stars as another folk musician. Carey Mulligan and John Goodman are also in the film. 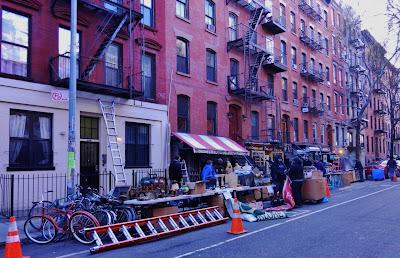 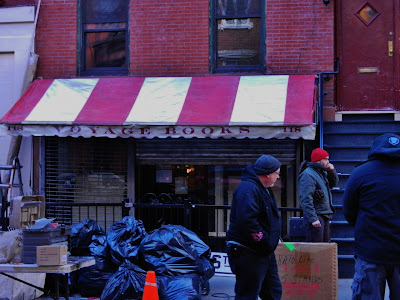 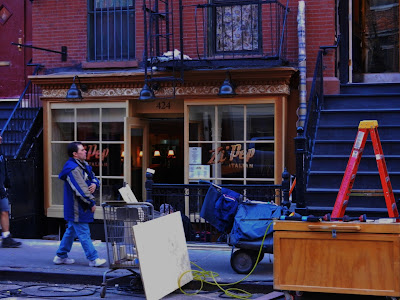 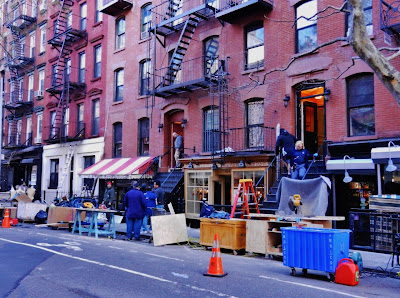 Previously on EV Grieve:
The Coen Brothers want to dress up East Ninth Street
Posted by Grieve at 6:43 AM

Email ThisBlogThis!Share to TwitterShare to FacebookShare to Pinterest
Labels: the Coen Brothers

The production company left a note on my bike (locked outside my building on 2nd St) requesting I move it. I guess crappy Schwinn road bikes from the 90's don't fit in with their period piece. Against my better judgement, I moved it this morning and to be fair, the production person gave me a very heartfelt thank you.

-Standard EV Grieve Commenter who only likes produce from Argentina.

Produce from Argentina is sooooo 2011.

It's really all about the puffins from Labrador this year.

Nice action shots by Bobby! I've seen Dave Van Ronk in a couple of Dylan documentaries and I'm anxious to see this movie.

Hey Spike thanks for being a good sport about that!

Imported produce was never hip, just a drain on both economies, and the environment.

Regardless, psyched for this movie, love the Cohen brothers, love Dylan more, I should try to walk through one of these eves, and see whats going on.

I was attacked by puffins once!