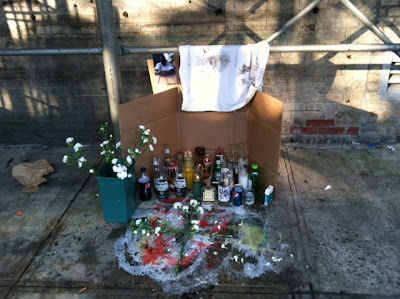 There is a memorial on East Fifth Street between Avenue C and Avenue D near the site of Friday night's fatal stabbing. CBS New York has more details on what transpired. A "nasty fight" broke out between a boyfriend and girlfriend. That's when 31-year-old Corey Capers, a relative of the woman, intervened. The boyfriend then allegedly stabbed Capers to death and fled the scene.

According to CBS, "Police have identified the boyfriend and said that they are close to an arrest."

Meanwhile, a reader sent along the above photo, noting one of the inscriptions - "you lost your life trying to save another." 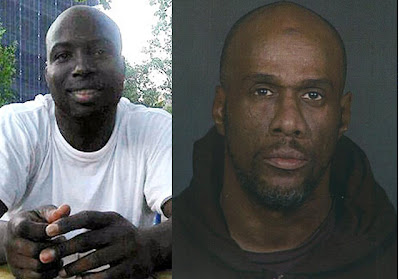 Capers reportedly has a 5-year-old son and was engaged to be married.

The Daily News reports that Knox has been in and out of state prison since 1986. "His rap sheet lists more than 25 arrests, including for such serious charges as rape, assault and criminal possession of a weapon, police said."

Previously.
Posted by Grieve at 8:19 AM

This is so sad.

25 arrests? Why is this guy still on the street?

He is still on the street because we have to make room in prisons for non violent offenders . Stop the drug war. Only violent people should be in prison.!!!