New owners, hours in store for Flea Market Cafe on Avenue A 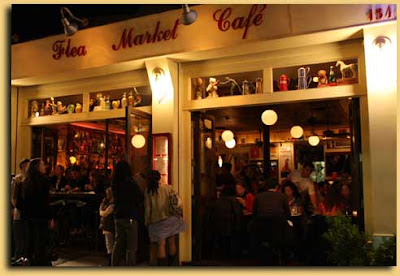 We continue to look at some of the items on this month's CB3/SLA agenda on June 18. According to documents on the CB3 website (PDF!), the principals behind L'Orange Bleue on Broome Street will be taking over the Flea Market Cafe on Avenue A between St. Mark's and East Ninth Street. (L'Orange Bleue, a Moroccan-French restaurant, closed last year after a 14-year run.)

The documents show that the new proposed hours are 8 a.m. to 1 a.m. Sunday-Thursday and until 2 a.m. on Friday and Saturday. So apparently the new variation of this cafe will be open for breakfast and lunch. And, at least based on the application, it doesn't appear that the menu might change too much: The principals describe the food here as "French Bistro Cuisine." (Not sure about a name change. The application reads, "Trade name (DBA): Flea Market Cafe.")

As for their old place on Broome Street, New York magazine described it this way: "L'Orange Bleue offers a cheery balance of tempered exoticism, local Eurocharm, and American thrift."
Posted by Grieve at 6:44 AM

Please don't fuck with this place too much. I love the food and the staff.

Good question, James. I changed the language in the post. The current owners are selling the place. Under the "applicant" section of the questionnaire on the CB3 website, it says — Trade name (DBA): Flea Market Cafe.

So perhaps the name will remain... will see if I can track down one of the new principals...

I heard from a little birdie that Flea Market was being taken over by the owners of Yuca Bar. I also heard from same little birdie that the manager/owner has copped a plea [bargain] for the fire last year. I don't know how reliable is that little birdie. Nonetheless, I guess goodbye to all you can eat moules frites on Tuesday nights and the sunset menu.

Anyway, as for L'Orange Bleue, it's not permanently closed. Supposedly only closed for a lengthy renovations and should be opening as the same restaurant.

And speaking of French restaurant, Resto Leon, an esquared favorite, is no more. Saw this license application notice -- by Ducks Eatery EC LLC -- at the restaurant window, and restaurant seems be going a renovation/remodeling.

I really loved Flea Market as the food was wonderful and affordable. I've had several holiday meals in there that were superb. I hope they don't change too much.

Leon and the empty space next door, which was once a corner deli are combining into a new restaurant. Not sure the name.

I just want to comment a little bit. I was a cook for many years at Flea Market Cafe and it was a great experience, and thanks to everyone who liked the food. The bad experience was that the owners hadn't gaven us the thanks for all those years that we worked very hard to make their restaurant stand out.

Last I heard was that owners of 10 Degrees were interested and took over in the space. It will re-open as Flea Market (sans Café), A Ten Degrees Bistro, sometime this month, nonetheless.