Updated: Children’s Magical Garden under siege on the Lower East Side 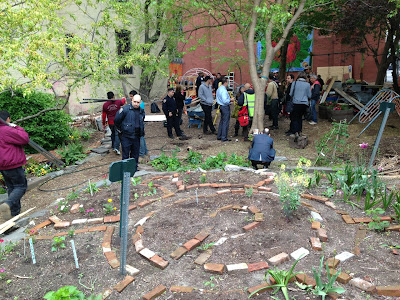 The Children’s Magical Garden on Stanton and Norfolk is the scene of high drama this morning... workers are there to erect a fence ahead of developer Serge Hoyda's plan to build on a portion of the property... a handful of community activists are on the scene ... as well as city officials, the NYPD, workers and reporters...

We're sorting it all out now...

Read more about the background here at BoweryBoogie ... and The Lo-Down.

Police have cordoned off the area for the workers to put up the fence... there have been several confrontations between community members and a rep for the developer... 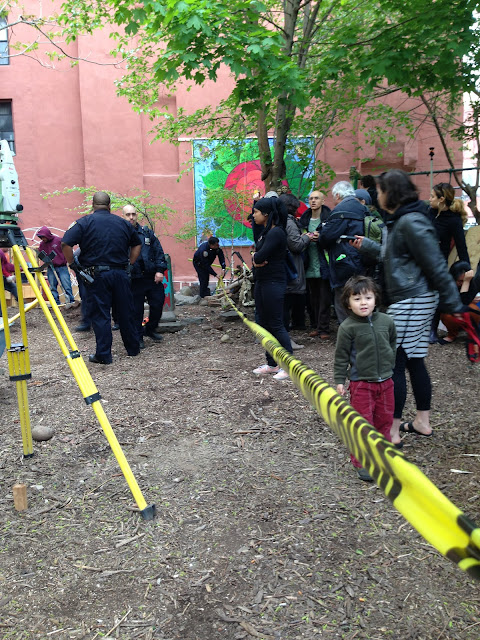 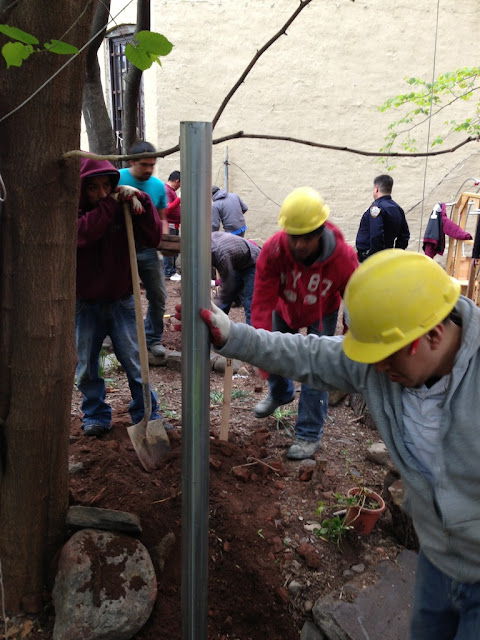 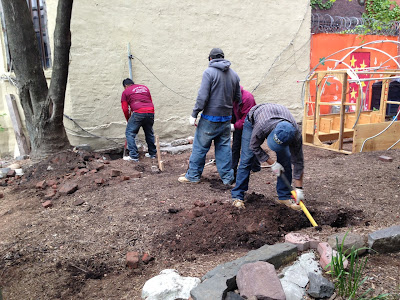 Community members and the developer's attorney...

... and a budding community activist...

According people on the scene, workers there to erect the fence are removing plants, etc. ... 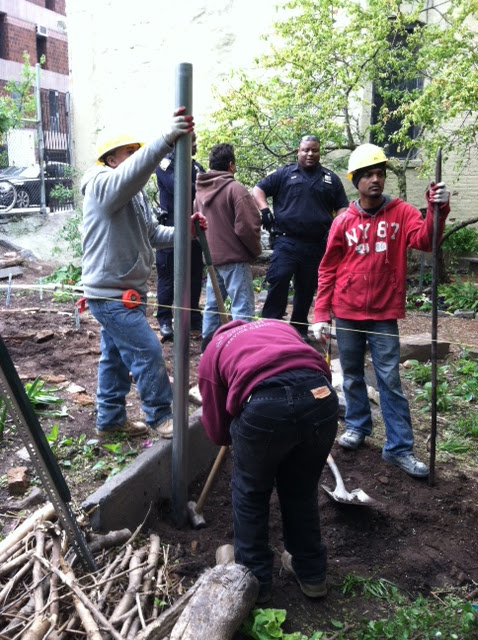 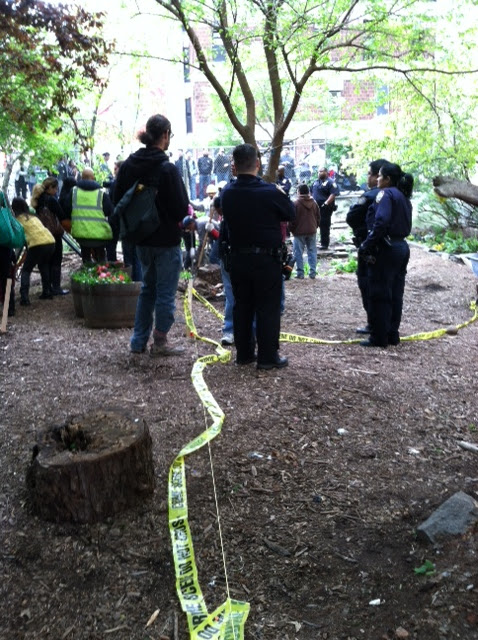 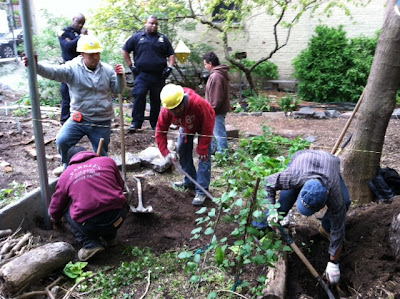 Workers have finished erecting the fence around the portion of the land that Hoyda owns... 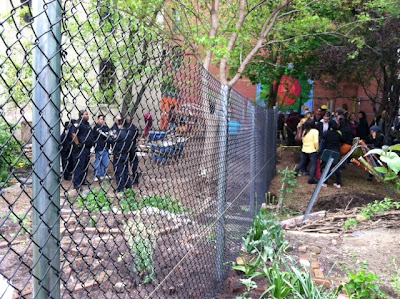 The Lo-Down just filed a report from the scene that provides a lot more of the background information on this long-standing battle for the garden.

Gothamist has a story here. They note that Councilwoman Margaret Chin's office has called for the removal of the fence. Her statement:

The Children's Magical Garden is a community treasure, and we want to keep it in the neighborhood. We understand that the developer has a permit to build the fence; however, such sudden action is not the best solution and nor the act of a good neighbor, especially since there have been active, ongoing conversations to come to an equitable agreement. We asked the developer not to put up this fence, and now we ask them to take it down.

The Daily News checks in with a piece on today's development.

“We had no idea this was coming,” said Kate Temple-West, president of the Children’s Magical Garden board.

[First video on post via Nicole Turcotte, volunteer from MoRUS. Photos and video via MoRUS]
Posted by Grieve at 11:16 AM

Hi friends - please show your support and stop by the Children's Magical Garden today! Bring a sign - stop Serge Hoyda! This magical space is an important part of the community, we can't let developers and 7-11's tell us what we need in our neighborhoods. WE TELL THEM.

Soon enough there won't be any spaces like this at all in the East Village or the Lower East Side. What can we do to preserve these spaces when it appears the city won't help?

wow, this actually made me cry. i can't believe this is happening.

what wrong with us!!! without nature we are nothing, we need green space desperately and in the LES there is so little!!! Barbaric to think that our city officials think its ok the build on every morsel of land. The LES is our neighborhood. There so many half built building they can finish off instead.

this place is anything but magical. I would never let me kid play there. I wont miss it.

Oh, please, 12:35. It was a bit of a mess a few years ago but they've really cleaned it up and it's lovely. Or was. With the chickens? And the see saw? Sweet little oasis. But god forbid sweet little oases of public space should ever stand in the way of some greedhead's divine right to plop out another shoddy, ugly pile of "luxury" apartments for moneyed youth on the make, eh?

There's always one in every crowd.

i live nextdoor at 153 Norfolk.

i love this garden.

this is very sad to read/see.

Well you know whose running the show around here.

David McWater. He's cb3's Land Use and SLA czar. He pushes projects through like this all the time.

E.V. Grieve should stop allowing anonymous comments and make those who always put up pro developer anti people comments identify themselves cause they are spineless cowards who like to troll and I think that many of them are on developer's payrolls. I have zero respect for them and even if I disagreed with their comments I would at least respect them for having the guts to put their name on their comments.

John, anonymous comments are not the problem. Maybe consider staying on point, and you might be more successful.

Until people get off their computers and off the streets, and instead do the real lobbying work, administrative work, that the other side is better at, things will not go our way. We need to get the rules of the CB3 changed to better benefit the community. We need to get people elected who truly represent their voters. Yelling and marching is so last century. We need better business skills and to use them.

I sometimes post anon, and if people on either side were not allowed to, they just make up names. You're call here is just a distraction from the core issue.

What an absolute surprise it was to see chickens and this amazing park for kids the first time I saw it. What is wrong that nothing is left "undeveloped" - ie - something that is just being enjoyed is converted into something characterless to make money? Fuck the stupidity of man and these people who see fit to desire/approve crap like this. May you never sleep another night in your soulless greedy lives....

Gotta love how the police are always right on time and in force to protect developers while they evict elderly people with alzheimer's or destroy children's gardens. Trying to remember if I've ever seen a cop show up to protect a tenant from an illegal eviction--oh, I make myself laugh!

This is heartbreaking. I, for one, am sick of seeing the community having to respond powerlessly to these type of events. We have elected officals with time, power and money who could have acted years ago to preserve this garden. So nice that they are making phone class and beating the protest drum now that the fence is going up. Same thing goes for the old public school being converted to dorm space in the East Village. Place sat empty for 12 years and our electeds did nothing to propose a better community use that would have averted the current problem.

From Lowdown, "The city has been in ongoing talks with the development company about building a new residential project on the combined parcel..."

Clearly, your elected council member never intended for this property to remain a garden. Now, will anyone remember this when the next primary election comes 'round?

Chin and Mendez are useless. They both supported the SPURA Plan and the NYU Expansion. They are currently doing nothing about the plan to build luxury housing on parks and playgrounds in NYCHA locations. CB 3 has repeatedly approved variences for developers because they don't want to see stalled construction or empty lots. They take the same approach to liquor licenses. If a storefront or piece of land has been vacant because the owner is greedy why should CB 3 support them by approving a bar or lounge or a hotel or luxury housing. I'm proud of the folks out demonstrating for the garden and Chars and Cooper Union but I am deeply ashamed of all of those elected and un-elected officials who are supposed to represent our community.

This was presaged by the city's destruction of Adam Purple's lovely Garden of Eden in 1986, and so many other green oases ripped out in exchange for cold brick, glass and steel. If you wanted to be literal you could point out that once upon a time, there was a building on every single one of these garden lots, but they would have been small, harmonious and accessible, not the forbidding yuppie fortresses being flung into every inch of space still open to the sky.

...what do yupsters (or yunnies) want with community gardens except (MAYBE) they don't want the light blocked with another building... but that's the way it goes... we may not agree, but the power structures are very very powerful. and that is sad, given that (and you know who you are) the people who cleaned up the EV/LES in the 60s, 70s and 80s are being pushed out now.

@ 4:38 - Your final sentence is so perfectly stated that it bears repeating, so I am posting it again. Very well put:

"I'm proud of the folks out demonstrating for the garden and Chars and Cooper Union but I am deeply ashamed of all of those elected and un-elected officials who are supposed to represent our community."

That douchebag lawyer probably goes home at night and wonders why everyone hates him.

I also love how he feigns offense to being called names, that he has no shame and no respect for children.

The kids recently planted fig trees, tomatoes, peppers, eggplant, herbs, flowers and various other plants to add to the already existing apple trees, prune tree, nectarine tree, peach tree, hostas, various herbs, butterfly bush and many other trees and edible plants planted by children.
With all the kids, monarch butterflies, bluejays, robins, and various other wildlife, not to mention summer jazz concerts and many kid friendly events, the Children's Magical Garden is a beautiful natural oasis and keeps the community alive and connected.
The community cleaned and beautified this place.
The fence dividing the garden is not nice. It took 31 years of local kids and volunteers having worked really hard, donating money and dedicating years of their time to make this land a community treasure.
asure?