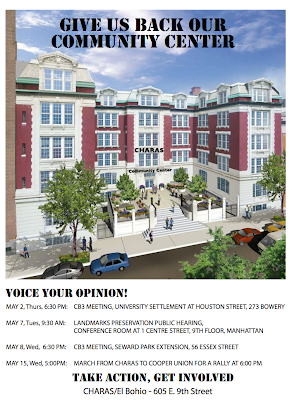 Efforts continue to see the former PS 64 and CHARAS/El Bohio community center on East Ninth Street returned to a community use.

As previously reported here, there are plans on file to convert the building into a 500-bed dorm called University House on East Ninth Street just east of Avenue B. Last month, developer Gregg Singer said that he already had a 15-year agreement for 200 of the beds with Cooper Union, as The Wall Street Journal first reported.

There's now a rally schedule for May 15, where residents and community leaders will march from the building at 609 E. Ninth St. to Cooper Union for a rally at 6 p.m. (More details to follow in the next few days.)

In its May newsletter released yesterday, the Greenwich Village Society for Historical Preservation noted:

An enormous dorm would not be a community use, and would add to the oversaturation of the East Village with dormitories. Additionally, GVSHP is working with Councilmember Rosie Mendez and the East Village Community Coalition to ensure that the Department of Buildings does not issue permits for the dorm construction, given that the current plan violates regulations meant to prevent the construction of bogus "speculative dorms," and requires that there be a lease and restrictive declaration in place for a school to use all the beds for a new dormitory. This plan does not have such assurances.

Read their letter to the Landmarks Preservation Commission here (PDF). Find more about community involvement here. Sign the petition to keep the building for community use here.

2 new sidewalk bridges arrive as city disapproves latest plan for P.S. 64
Posted by Grieve at 6:13 AM

Please God no more dorms in the East Village.