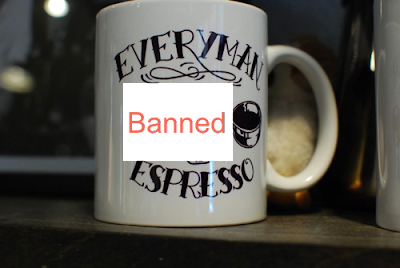 It's all about the "I [coffee cup] N Y" logo that Everyman Espresso on East 13th Street has been using these past few years.

The New York Times has the story.

Then, last month, came the letter from agents for the state’s Department of Economic Development.

It said, "Everyman Espresso’s unauthorized and confusingly similar use of the I ♥ NY® logo" violated federal trademark law and implied "a misleading designation of source, origin, endorsement, sponsorship or approval by the New York State Department of Economic Development of your merchandise."

So the Everyman owners ditched everything with the logo.

That wasn't enough for the state, whose attorney is requesting "an accounting of all gross revenues generated during the period when the I ♥ NY® Trademark was used" to establish Everyman Espresso's penalty.

The reaction from Everyman co-owner Sam Penix: "Basically, it's extortion. It's also ironic because we are being threatened by the entity that has vowed to grow our New York business."

Read the whole article here.
Posted by Grieve at 5:45 AM

this is ridiculous and an abuse of power.
a state senator or assembly person should be contacted for help.
perhaps a press conference?
and if necessary sam should ask us, your readers, for a letter writing campaign.

Great. Just what we need to expand economic development in New York State. A pork-barrel agency pursuing trademark infringement against a legit business even after the business complies with the order to stop using a parody of their stupid logo. Your government in action!!

AS if placing the logo on the mug generated any business? People wouldn't have seen the logo until AFTER they ordered the coffee so to claim it generated business for them is idiotic.

I told'em to make it "I Fuck NY", but they wooodenlissen.