Residents shuttle from the Mars Bar building to Jupiter 21 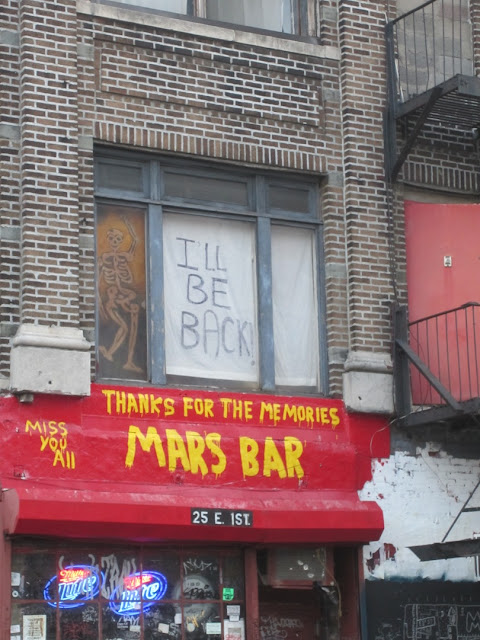 Catching up with this feature yesterday in The Wall Street Journal... which provides an update on Jupiter 21, the residential building at the former site of Mars Bar and the buildings at Second Avenue and East First Street... 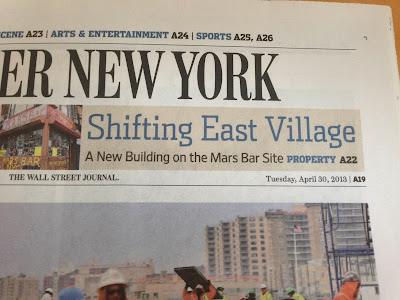 Several of the residents of the former buildings will be moving into co-ops here at the promised rate of $10. (You can read the article for all the background on how this deal transpired.)

In an unusual blend of old and new New York, nine long-term tenants of two small buildings on Second Avenue struck deals to buy cooperative units in a new 12-story building, where they will share hallways with 51 mostly young renters — many new to New York and unfamiliar with the neighborhood's history.

The bulky new building will be known as Jupiter 21, and will feature a model of the planet Jupiter hanging in the lobby.

And returning residents such as Andrea Legge, an artist who lived in the previous building for decades, won't be subjected to Jupiter 21's leftovers.

"I am grateful they didn't give us lowlifes apartments in the back," she said. "I feel hugely entitled to this luxury apartment, but I feel completely unworthy of it at the same time."

The longtime residents also discussed how the block looked in the 1980s.

"There was nothing romantic about it," Ms. Legge said. "There were needle junkies in the basements. It stunk and it was all so over." 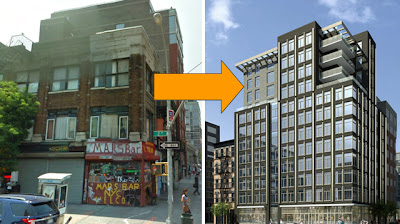 [Image via Gothamist, reposted with permission]

Now will the Mars Bar return as well?

Previously.
Posted by Grieve at 6:08 AM

Gotta say, all this protracted grieving and pining for that little old bar is pretty pitiful. Talk about going out with a whimper.