404 E. 14th St.: The coolest building that you will find with a McDonald's on the ground floor 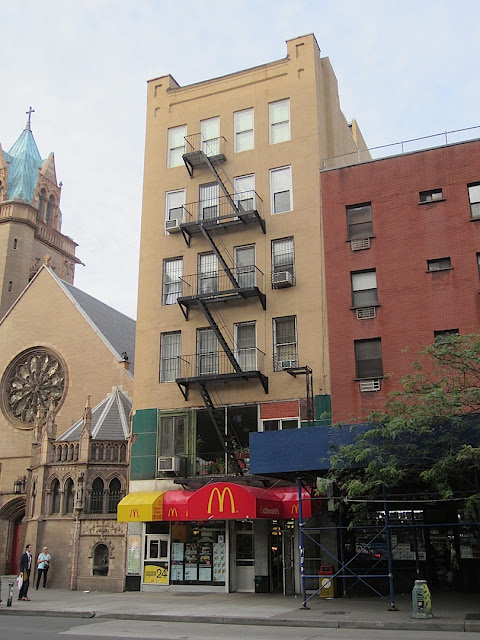 From the outside, 404 E. 14th St. doesn't look like much, right? ... especially with that McDonald's and its express window taking up the ground floor. The back of the building on East 13th Street (alternately known as 405 E. 13th St.), is more promising... 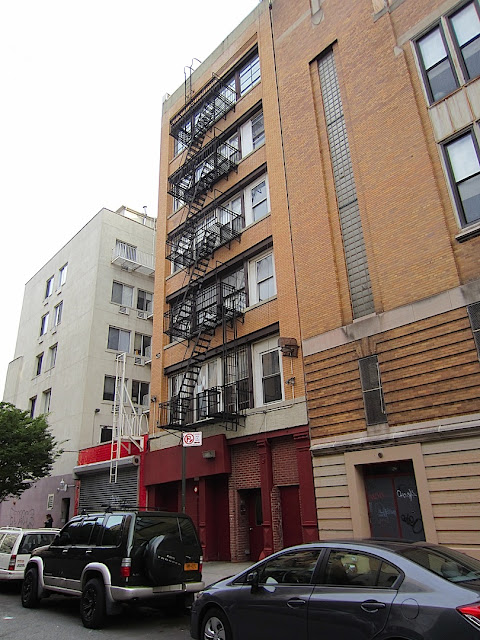 However, since the 1960s, the building has hosted and housed a dynamic community of artists, poets and filmmakers. And now, gallery artist Tom Burckhardt, who currently lives and works in the building along with wife and fellow gallery artist Kathy Butterly, have organized an exhibit showcasing the work of artists who live (or have lived) at 404. The opening reception is tonight at the Tibor de Nagy Gallery, 724 Fifth Ave. between 56th Street and 57th Street. (The exhibit is open through Aug. 2.)

Here's some information from the show's news release:

Beginning in the 1960s, it was among the first in New York to become an artist building, and remains so today. Although stylistically distinct, the artists who have lived or worked there over the years are nevertheless bound together in their shared experience of this uniquely vibrant, artistic scene.

The exhibition will comprise paintings, sculpture, and photographs by the various artists, in addition to films, correspondence, poetry and ephemera relating to the history of the building and its inhabitants. To coincide with his current Museum of Modern Art exhibition, Claes Oldenburg will be represented by working maquettes from his collection. A selection of poet Allen Ginsberg’s last photographs, taken when he lived in the building, will be included, as well as a 1966 foam floor sculpture by John Chamberlain. Rarely-exhibited works by Larry Rivers that were created at his 14th Street studio will be on view, such as a portrait of cult writer Jim Carroll, along with a large scale work from his Bad Witch series.

The building dates to the early 20th century and originally housed a button factory. It later became a warehouse for the locally owned Bloom & Krup hardware store. The first tenants, including Rivers, Claes and Patty Oldenburg, Yayoi Kusama, On Kawara, Chamberlain, and Herb Aach, arrived in the mid-1960s. (The building made a recent notable appearance in Richard Hell's memoir, "I Dreamed I Was a Very Clean Tramp," where he discussed living here and bedding Patty Oldenburg.) Filmmaker Wes Anderson owns a space in 404, and he reportedly edited "Moonrise Kingdom" here.

Tom Burckhardt, who moved into the building in 1995, answered some questions about the exhibit via email.

Were you aware of the building's history when you moved in?

I knew Larry Rivers, of course: We bought our space from him for a pretty fair price at the time. He was quite good to us. My folks had known him from back in the 1950s on. My dad, Rudy Burckhardt, made some films with him in them. ("Mounting Tension," 1950, also with Jane Freilicher and John Ashbury.) I knew Fred Wilson and Whitfield Lovell a bit through some mutual friends. I seem to have known that Claes Oldenburg had been here, too. 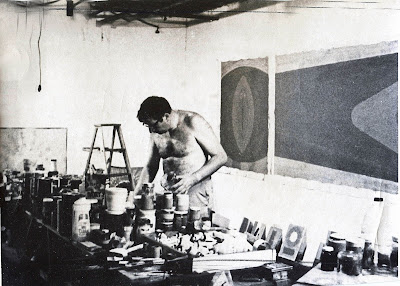 What compelled you to research and put together this exhibit?

Based on that little I knew, I thought I should make time with Fred, who moved in in 1976, and tape his recollections. Somehow, as with someone so close at hand, we never got to it! I found out the name of Jean Dupuy, who had lived in our 2nd floor space in the 1970s and found an out-of-print book he published chronicling these amazing informal exhibitions he put on in the space. That was a big revelation. It explained the mysterious Golden Section spiral carved in my studio floor (by Gianfranco Mategna, in 1973).

I figured I should gather all this material and one day an enterprising graduate student would write a paper on it: I'm no writer, that's for sure. My wife Kathy Butterly mentioned my interest in this stuff to Eric Brown at the Tibor de Nagy Gallery and he proposed it be an exhibition. My main excitement was to track down any past residents still around, tape interviews, and form an Rashomon-style oral history, à la "Please Kill Me," one of my all time favorite books.

In retrospect, it makes sense, as Tibor de Nagy represents me, my wife and the estate of Larry Rivers. Don't know why I didn't think of pitching it to them first! 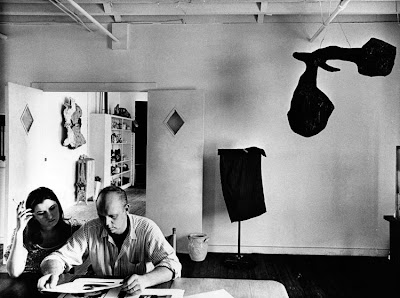 What was your favorite thing that you learned about the building/previous tenants?

It's hard to choose. In talking to Claes Oldenburg, he mentioned that [Warhol star] Ultra Violet would rehearse in her boyfriend at the time John Chamberlain's loft. And I though that sounded like a great parallel Warhol/Velvet Underground kinda thing. I didn't dig much more up on that, even with Ultra Violet's help. "Everybody was in a band then" she said. 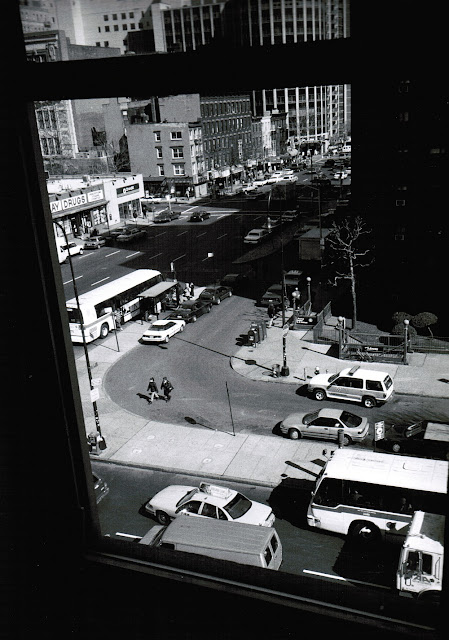 Do you think a creative environment like this can continue to exist in the East Village of today/the future?

Well, speaking for my wife and I and Fred and Whitfield and others in the building, yes, although, clearly it's not what it used to be. I think the creative types in the neighborhood tend to find each other even with the changes in the area.

I know when my kids started school in the East Village, I met a lot of artist parents who have held on, and that was quite encouraging. I grew up on East 14 Street and 3rd (over the Jefferson Theater!) in the 1970s so my nostalgia is tempered with some appreciation for the good changes. I don't miss being mugged all the time and never felt it was good for my creative juices. I still find a lot to love in the East Village.

From 1971, Inside Dope by Rudy Burckhardt with Larry Rivers, who owned 404 E. 14th St. for many years, and Brendan Atkinson.

The following artists will be represented in the exhibit: 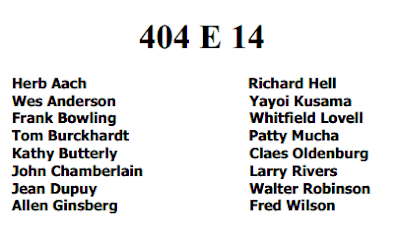 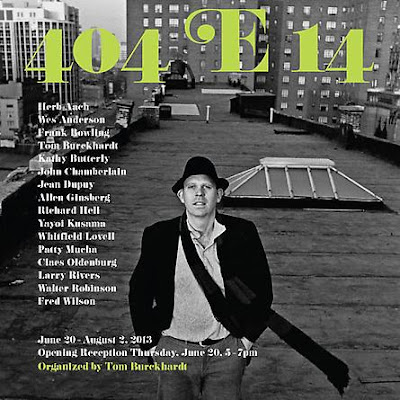 A catalogue will be available and will feature transcriptions of interviews conducted by Burckhardt with many of the artists, poets and filmmakers who have resided at the building from the 1960s through present day.
Posted by Grieve at 6:00 AM

I wonder if the McDonalds' commercial rent sustains the viability of the building. Chain stores have a use -- if we had some kind of community planning in NYC...

The apartment directly above the storefront was lived in for a long time by Walter Robinson, who founded Artnet Magazine and the website of the same name. Went to a couple of parties there, it was a sweet space.

I wonder if the apartment, especially the one directly above, smells like french fries all day. I wonder if I could get a heart attack, nasally.

I went to a small writing workshop on the top floor once, wrote something that I'm very proud of that day. That's is a great building.

wow, that's cool. how i wish i'm surrounded by fellow artists in my building because all i see here are f*cking BASIC girls and bros.

anyway... i wonder if all the artists are in favor of having a mcdonald's on the ground floor of their building?

Always wondered about the story of that building; wanted to live there, but no chance(the money thing). Two simular buildings in the nabe come to mind, and probably have a like petigree. The one on 4th St. just east of the Bank of America branch on 2nd Ave and the "Wyoming" building on 3rd just east of the Salvation Armory on the Bowery.

On this topic: Wonder who #1, put the parisien style sky light window on the older north facing building on 4th St. just west of 2nd Ave, and who over the many yrs. occupied it??