Wow. EVG reader John passed along this YouTube discovery... a 15-minute Dutch documentary by Bram Van Splunteren that follows Iggy Pop around on Avenue B, East Eighth Street, Avenue C and East Ninth Street... At the time, Iggy was living in the Christodora House. (He doesn't mention it by name, but says that living in a nice place "gets up a lot of people's tree. But fuck it. What the fuck? I'm not a martyr.")

Along the way, Iggy plays tour guide ... starting with a shot inside Vazac's ... then along Avenue B... he mentions where he used to buy drugs, points out a few Chico murals... and displays a lot of enthusiasm. 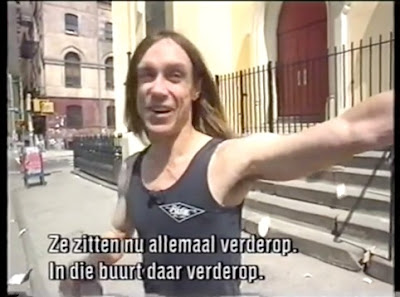 A highlight: At the 4:45 mark, he walks into Pedro's bakery on Eighth Street and Avenue C and unleashes his Spanish... he orders food and realizes that he doesn't have any money. The filmmaker has to pay. "This is where I eat when my wife's not in town. I come here and get sandwiches and cake and strong coffee. That's what I live on."

At the 6-minute mark, he talks about how much he likes Avenue C. "It's beautiful here. Really nice."

Anyway, this recap doesn't do the video any justice... you just have to watch...
Posted by Grieve at 6:14 AM

OMG, Pedro's, they had THE best Spanish coffee in town! And I used to see Iggy eating dinner at Aunt B's, a restaurant on 11th and B run by Mike and Carol, wonderful people, great food, small, dark, a place for adults. They closed a couple of years after 9-11, still miss the place and the friendliness.

Thank you so much for posting this.

This is so great. Did Iggy leave the East Village? I used to see him buying frozen yogurt at Ray's, but I haven't seen him in a few years.

Im pretty sure I saw Iggy on B and like 12th a month or two ago.

Iggy lives in Florida - yep - he is that old now.

Here is an interview Iggy Pop did with CNN on living in Miami:

Ever since I saw Iggy and David Bowie on the Dinah Shore show in 1978 I've been a huge fan and I was like 12 back then. First time I actually got to see Iggy live was at The Academy in Times Square maybe around the same time this video was made. Great show. Would've liked to have caught him in the years before that but never had the chance.

I guess around the time Iggy was living at the Christadora I saw him and Mark Arm of Mudhoney doing a photoshoot together in front of the building. That must've been '93/'94. He's been in Miami for several years now driving himself around in his Rolls Royce. I read an interview with him years ago where he said something along the lines of New York is losing it's old character, and in Miami you could still walk around and here people speaking different languages or something like that. You can still here different languages in the East Village, but I get what he's saying. If I was him I'd be living in Miami too.

Loved this. Iggy - so erudite, so magnanimous, so charming.

And those blue police cars. I miss those.

We went to the same dentist!

That was awesome. Love the retro Hobie logo t-shirt (you can take the boy out of L.A., but...)
Love the Coffee and Cigarettes bit too.

so awesome! thank you, John, for finding and sharing! i had no idea that Chico had been around for so long (still see "his"? work all over the place in the EV and LES). also, so cool to see a white guy having to speak spanish in the EV; there's still a huge spanish-speaking influence, but soo many people are bilingual, you wouldn't find yourself in a situation like that today. would be cool to have more of that kind of diversity. <3 EV!

Yes! I love this little film!! So good to see him on 9th walking by La Plaza Cultural as it was, and with my building behind him. A great one!!

He's living down in Miami these days.

Thanks for resharing today! What an amazing video