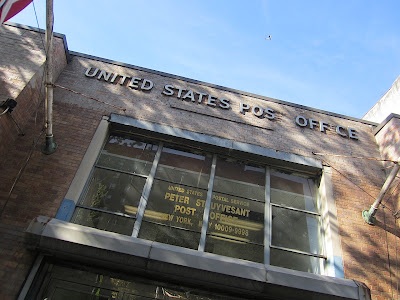 Catching up with this report by Sabina Mollot on the Town & Village Blog ... she reported on Friday that "the union representing regional postal employees learned that the United States Postal Service had decided to proceed with a plan to relocate the Peter Stuyvesant Post Office on East 14th Street."

The USPS would lease the former Duane Reade on East 14th Street near First Avenue for retail services, such as stamp sales and P.O. boxes.

However, a USPS rep told Mollot that the decision is not final.

The lease expires at the current location next February. The landlord reportedly told the USPS that they have other plans for the building, which was erected in 1951. 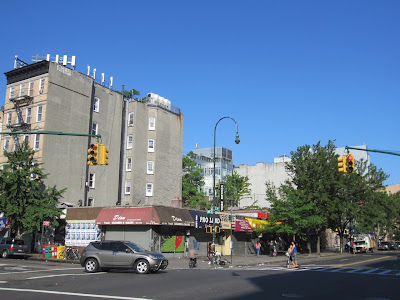 Previously on EV Grieve:
UPDATED: Did you hear the rumor about the Peter Stuyvesant Post Office branch closing?
Posted by Grieve at 6:00 AM

"We have other plans for the building" - translation NYC 2013-style: "We're tearing the building down so we can throw up some ugly-ass glass tower and make a shithouse full of money off this hothothot neighborhood".

I really fear what is about to take place on 14th between 1st and C.

Not final? This thing was pretty much a done deal by the time the people knew anything about it. In fact, by the time there was even talk hearing public opinion the post office had already made the decision to close the branch. I know it's not the best branch in the world but it's close and it's one I've been using for years. How can this just happen?? Shouldn't we have a say that matters?? Where are our elected officials who are supposed to stop this?? This relocation was done illegally and completely without a say of the people. And once again our Great and Wonderful city council member Rosie Mendez has just let it happen. Yeah, she may have voiced her opinion saying it would be harder for us to get to the post office but its not like she took any real action. I assumed she had our backs, thats why we pay her, isnt it? Guess not.

The Duane Reade is not even a block away and seems like an ideal space for the USPS. Maybe the move will help improve the terrible service we East Villagers have come to expect at this location.

But the Duane Reade location does not have a loading dock. The current PO takes the whole block, front to back for trucks to bring packages and mail. They haven't explained the function of that new potential location beyond being a place to mail letters and packages. In fact, they spoke about carriers being reassigned to the Madison Square PO on 23rd and 3rd (zip 10010). Where are all the 10009'ers going to pick up their mail and packages ??

Sadly, they just keep chipping away at our democracy. Just look at the destruction of the NYPLs in Manhattan and Brooklyn. We are all losing, even those in higher cash brackets, not that the people in power positions care. I suppose a lot of newbies in this area will be living in glass towers with appointed door persons, not like us slugs who actually do have to head to the PO for a package. #NobodyCaresAboutNY'sPoor

editrrix: I get your point, but getting mail and packages from this USPS location is quite disastrous. There is no way I can defend it. When tracking my packages, I routinely see that supposedly a delivery was attempted and a notice left, all while I was home and know for a fact that neither event took place. You then go to this USPS office, you wait in crazy lines and sometimes find out that your package has been lost. It's awful; I hope the move can be accompanied by better management.

That's right, there will be no mail sorted at 10009's new post office. Our mail and and mail carriers are being reassigned to the Madison Square PO on 23rd and 3rd (zip 10010. One citizen attending the hearing on the closure at the gym on 13th Street pointed out that the madison Square station (10010) is already operating at capacity.

Our elected leaders have been mostly ignored by officials at the Post Office. It is Congress, BTW, that oversees the USPS, not the city council, so Dan Garodnick, Rosie Mendez, and Community Boards 3 and 6 hold little leverage in this matter.

So our 10009 post office, with new gigantic condos being developed every day, will reside in 10003.

thats not a Post Office..If you look at the sign in the picture - it clearly says POS OFFICE...stands for Piece of Sh*t Office in my book

Can someone rent that building after expires at the current location next February?

Does anyone know the actual date of the closing?

By the way, this is not the first time Rose Mendez had sold our neighborhood out... she's really useless & not at all on our side.