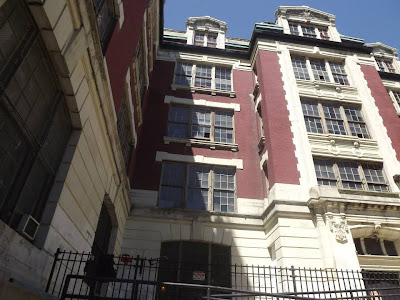 [Photo from June 4 by Edward Arrocha]

Back on May 8, the Landmarks Preservation Commission (LPC) heard public comments regarding the former PS 64 and CHARAS/El Bohio community center on East Ninth Street. As you know, developer Gregg Singer will need approvals from the LPC in order to make changes to the exterior of the landmarked building for his proposed 500-bed dormitory.

And yesterday, the LPC approved the application with some minor modifications. (How minor? The stair bulkheads were modified to be narrower, the rooftop railings will be black-painted metal instead of glass and will be set back an additional 2 feet, etc.)

As expected, for preservationists, the next battlefront will be with the Department of Buildings, who must approve plans to convert the building into a dorm.

"We always knew this battle would really revolve around the dormitory use, rather than the landmarks approvals. Working with a coalition of groups and elected officials, we are continuing to challenge the legitimacy of the dormitory arrangement, which has not yet been approved by the Department of Buildings, and which we hope and will fight to ensure is never approved by DOB," Andrew Berman, executive director of the Greenwich Village Society for Historic Preservation, told me in an email. "We are still quite optimistic that this plan, like all of Singer's prior totally inappropriate plans for the old PS 64, will end up in the dustbin of history."

Preservation groups and some local residents want to see the building returned for community use. 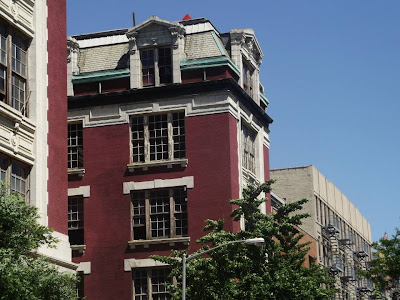 Landmarks Preservation Commission asks to see modified plans for former PS 64
Posted by Grieve at 6:10 AM

Does that miserable Hottentot have to re-do the stonework he so ruthlessly stripped away?