Alphabets is closing, and moving to its other store on Avenue A 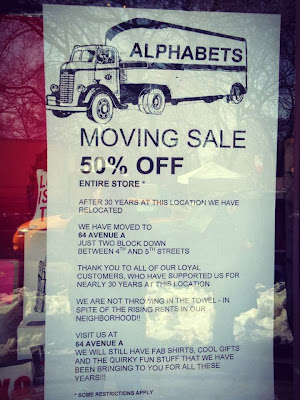 Last July, Alphabets opened a new outpost at 64 Avenue A for its gift shop ... this was done ahead of a planned move from its home of nearly 30 years at 115 Avenue A... As you can see from the sign above, a moving sale is underway...

According to public records, the building at 115 Avenue A was sold in August 2012 for $3 million. The LLC that bought the building shares the address as the notorious 9300 Realty (owned by Croman Realty). A tipster told us that Alphabets could not negotiate a new lease.

Per the sign: "We are not throwing in the towel — in spite of the rising rents in our neighborhood."

We're happy that they're sticking around… 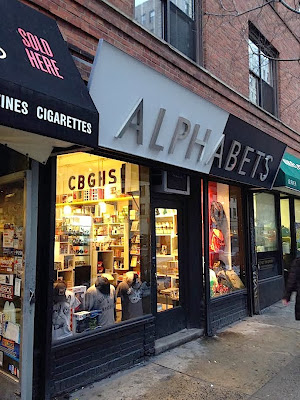 [The newer Alphabets at 64 Avenue A]

Previously on EV Grieve:
Alphabets opens new outpost on Avenue A
Posted by Grieve at 5:30 AM

Email ThisBlogThis!Share to TwitterShare to FacebookShare to Pinterest
Labels: Alphabets

This is so sad. I know they aren't closing. They are moving down the street. But it is going to be a big change for that strip of Avenue A to see them move. We just lost 7A and now this. Let's all make sure we walk to their new location further down Avenue A and support them. I want Alphabets to stay in the East Village!

At Christmas I went to the newer shop and found one of those old-school type telephone handsets for cell phones--precisely what I was looking for. And a few other fun chochkies. Great store for gifts, especially when you have no idea what to give.

Are Alphabets and its neighbor operated by the same company? If so, are they just boarding up that connecting door opening between the counters?