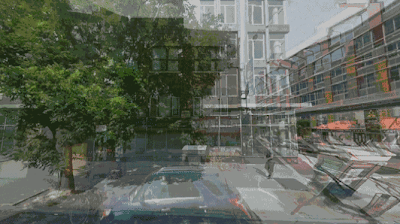 Artist and programmer Justin Blinder has created a project called Vacated, which he explains this way:

Vacated mines and combines different datasets on vacant lots to present a sort of physical façade of gentrification, one that immediately prompts questions by virtue of its incompleteness: “Vacated by whom? Why? How long had they been there? And who’s replacing them?” Are all these changes instances of gentrification, or just some? While we usually think of gentrification in terms of what is new or has been displaced, Vacated highlights the momentary absence of such buildings, either because they’ve been demolished or have not yet been built.

He assembled this for MoreArt's public art project, Envision 2017, which asked artists to imagine New York City in the future.

From his project, a familiar corner… Second Avenue and East First Street… where the Mars Bar and other businesses were replaced by Jupiter 21...

Workers are currently fitting the former Mars Bar space with a TD Bank.

You can read an interview with Binder here on Gothamist.

Some of the worst architecture ever.

Anything is better than what was there before (building-wise).