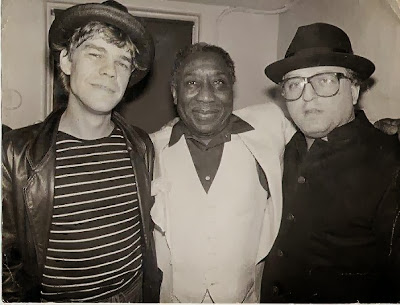 [Thau, right, with David Johansen and Muddy Waters in the early '80s. Photo via Facebook]

Legendary music producer-manager-entrepreneur Marty Thau died last Thursday at age 75. While there hasn't been any official announcement about his passing, his many friends are paying their respects on Facebook.

Updated 4:45: Billboard has his obituary here.

He told Vice a few years back that he had been in poor health starting in 2010. "I had inner bleeding in my abdomen and I had an operation [where] I died on the operating table but they revived me. ... And then I lost the use of my kidneys. Now I have to go to dialysis three times a week."

Thau, the founder of Red Star Records, worked with everyone from John Cale to the Ramones (he recorded the band's first demos) … Blondie… Richard Hell and the Voidoids … the Fleshtones … Suicide… and the New York Dolls, who he served as manager.

Here's an excerpt from an interview in Vice from June 2012 where he talks about working with Suicide:

I came across [them] when I was doing shows with the Dolls and bands who were part of that Mercer scene in '72. I put them on a St. Valentine's Day show and I thought, “These guys are incredible!” They weren't for everyone but they were really stunning as far as I was concerned. But I was so immersed with the Dolls — they were sort of my financial albatross — that I couldn't do anything with [Suicide] as much as I enjoyed what they were doing. Then I didn't run back into them for a few years. '76 is when I came across them again.

It was down in the East Village one afternoon. I happened to bump into Marty Rev and he said, “Ah, how ya doin'?” and all. “We're playing at Max's Kansas City in a couple of weeks. Would you like to come to the show?” And I said, “Sure, I'd love to.” So I went to the show and I couldn't believe how great I thought they were. Even better than they were earlier. Certainly more unusual. I never thought they were really commercial but I enjoyed what they were doing and I respected what they were doing.

He had reportedly been working on a memoir titled "Rockin' the Bowery: From the New York Dolls to Suicide." Rocker had an excerpt of the memoir a few years back.

Sensitive Skin also ran an excerpt of Marty's memoirs, from the first European tour by Suicide.