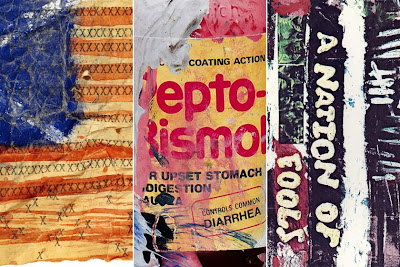 You may have read the story about longtime East Village resident Alexis Adler, a one-time girlfriend of Jean-Michel Basquiat. In 1979, he "began transforming" her East Village apartment into "a living installation," including a wall mural featuring Olive Oyl. The two broke up the the following year, but Adler preserved his work.

With the help of several people, including Basquiat’s former assistant, Stephen Torton, Adler, a 57-year-old mother of two and an embryologist, is finally ready to put the work up for auction, the Post reports today.

"I couldn't hold onto everything, or leave it in a safe-deposit box," she said. "It’s not fair to Jean! It needs to get out into the world."

And about their relationship, from the article:

As Adler describes it, living together was less 'Barefoot in the Park' and more 'Desperately Seeking Susan'-meets-'The Odd Couple.'

They foraged for furniture off the streets and lived on eggs, grits and cereal. He gave her gifts of painted T-shirts; she brought home batteries to feed his cassette player.

All the while, he painted. Every flat surface was fair game.

"You'd get up in the morning and there was wet paint on the floor," she says. "From the brooms to the bathroom!" One day she came home with a gold lamé coat she bought in a thrift shop; by morning, he'd painted it pink, black and gray.

"I was a little upset," she concedes. But she got over it: That coat is one of the few things Basquiat made for her that she hasn’t put up for sale.

Basquiat's work will be on public display Saturday through March 28 at Christie's. Check it out here.

Previously on EV Grieve:
A treasure trove of Basquiat in this East Village home
Posted by Grieve at 1:41 PM

Email ThisBlogThis!Share to TwitterShare to FacebookShare to Pinterest
Labels: Basquiat

One of the pieces is priced over $1 million! We're going to have one very rich neighbor. Good for her!

How did she physically remove the plaster, intact, so that she could sell that part of the wall? and also, I am assuming that she must own the apartment. Otherwise, I am sure that if the landlord discovered she was doing this he would lay claim to the paintings on the physical walls as his property

SHe had people from Fine Art Restoration refurnish and remove the wall.

Thanks Grieve, I gathered that, But I mean physically, how do you remove plaster from a wall, intact, without crumbling?

Will any of the works go to museums or is everything being auctioned? Or maybe museums will buy some of the art at the auction?

The basic way is to glue a fabric to the face, cut around the sides and (depending on how big it is) into smaller sections. Then it is cut away from the underside. What the plaster is on and what kind of paint or fresco technique was used drives the details. The fabric is removed after. Same methods as removing a fresco from a archaeological site.

It is great that she gets to profit off of this and not the landlord. If my landlord heard there were valuable works of art embedded in my walls, there is no way he would let me remove them and sell them. He would be down here with a hammer and chisel grabbing them for himself.

She owns the apartment.