Report: Ben Shaoul's parents are suing him for $50 million 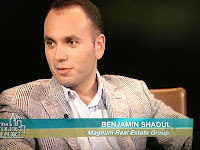 Developer Ben Shaoul is being sued by his parents for $50 million, according to The Real Deal.

Abraham and Minoo Shaoul are accusing their son of treating Magnum, a major Manhattan real estate investment company co-founded by Shaoul and his parents, like his “own personal piggy bank,” using clever legal maneuvers to derive payouts from buildings purchased by the company without their permission.

For his part, Ben told The Real Deal in a statement that he "categorically" denied "all of the allegations contained in the complaint." He said that it was a private matter, and blamed it on "the deterioration of my relationship with my mother."

Meanwhile, in reporting on the matter. Curbed is the clear winner in the Paragraphs of the Year Awards:

Developer/80s breakdance movie villain, Ben "The Sledgehammer" Shaoul is well known for his hated developments in the East Village/LES. But when he isn't tearing down nursing homes and shrieking with maniacal laughter, he's also getting into ugly legal entanglements with his own parents.

This is the story of the rich, they're always at war with one another.

My money's on the parents as being the truthful ones here. Obviously the son is a demon seed.

His parents should blame themselves for unleashing this one to the world.

what goes around comes around.

The move from jail into the real estate biz makes perfect sense.

Curbed turning on one of their own?

Can we get this family to self-destruct more quickly before he ruins anything else around here?

FYI many of the storefront businesses that came about under his reign before he sold to Kushner Trump are co owned by him. He pays for the buildout in exchange for a percentage in the business and uses the businesses to clear out tenents with faulty rooftop ventellation systems, backyard use and huge pipes and shafts to block peoples windows. It's not just restaurants and bars. Could be a business that one might think is good for the neighborhood. The little businessman is in on the whole thing with Shaoul and everyone supports the storefront business and the little businessman over long time tenants. Now which storefront might that be?

In the belief the sunlight is the best disinfectant, here's the full text from the really juicy part of the lawsuit:

NATURE OF THE ACTION

1. This action is about a young man whose avarice has led him to ignore corporate form and instead treat the companies of which he is a member as his own personal piggy bank. Defendant has misappropriated millions of dollars from the refinancing of mortgages against the properties owned by companies that are jointly owned by the parties hereto and has refused to repay millions of dollars lent to him by the Plaintiffs.

3. The money Defendant is stealing from his parents is being used to fuel his
addiction to the "high life." Defendant claims he is too poor to repay his debts to his parents while he builds a multi-million dollar home in the Hamptons complete with three kitchens, a screening room, gymnasium, billiards room, olympic sized swimming pool and tennis court and a fully equipped guest house, rents a luxury apartment in New York City for $15,000 a month, spends millions of dollars to renovate a townhouse in the West Village and travels around the world first class. Defendant forged his parents' signatures on loan documents so he can have the funds to buy himself a Ferrari. And when Defendant isn't able to convince his parents to loan him more cash to fund his lavish lifestyle, he refinances the properties they jointly own and pockets the proceeds or uses the proceeds to purchase additional properties that he puts in his name only.

Now don't you wish you had rich parents that bailed you out of jail then gave you millions of dollars to invest in real estate and buy Ferraris?

u dont have to destroy evil it destroys itself.

Shaoul seems to me to be a fine example of the rich operating in a different legal system from the rest of us. In project after project--his dealings with his parents and apparently some jail time notwithstanding--Shaol projects consistently skirt the law. Name one Shaol project that didn't happen without multiple violations of building code, zoning, and common sense? A close look at Shaol's operation should result in, on, no more bank loans and no more permits and no more community board okays. And the projects that do glide through . . . look shady. The Cabrini Center sold for $25 million and now it's worth $70 million? Does that $25 million look a little low?

Are there any businesses or building owners that would open up some space to make a graffiti/mural of an "80's Breakdancing Villain" painted with Shaoul's face holding a jackhammer? Maybe make it very uncomfortable to be seen in the neighborhood he is attempting to destroy.

Giovanni, Why don't you start your own blog?

Anton van Dalen should do that graffiti art; his public stencils in the early 1980s EV were legendary.

methinks the fruit doesn't fall too far from the tree.

Normally I wouldn't take pleasure in another's misfortune, but in this case I believe I'll make an exception. This is the best news of the year so far. When no one else will tell you that you're messing up, your parents will. Good on them. BTW, "addicted to the high life" sounds to me like a euphemism for cocaine, just saying...
-former Shaoul tenant

I know it's not right to take pleasure in others problems, but, really, I just can't stop giggling. This man is waste of skin - as is, I'm sure his parents, who raised this monster, are - as I'm sure his three darling children will someday be. Twenty years from now we'll all be reading about Ben suing an ungrateful little Jr for thievery!