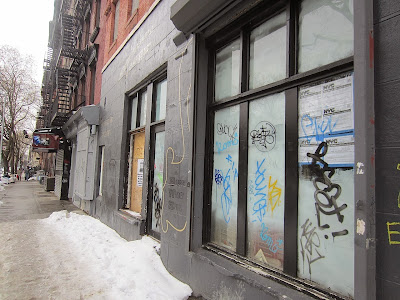 There's yet another legal battle involving the yet-to-open Pride and Joy BBQ on First Avenue.

Celebrity BBQ chef Myron Mixon was going to open a restaurant/saloon in the former Lucky Cheng's space. (Read that post here.) But a subsequent lawsuit between Mixon and his partners put the debut in doubt.

However, his remaining partners decided to move forward with a 220-seat "draft house" and "honky tonk" featuring three bars and about 20 TV screens, per DNAinfo. (The SLA approved a liquor license for the space with a 4 a.m. closing time in October.)

Now, as Serena Solomon first reported last week at DNAinfo, the owners of Pride and Joy BBQ are suing building landlord Hayne Suthon for allegedly lying about the building's condition and then attempting to evict them from the location for demanding repairs. The BBQ group is seeking $22 million in damages.

Pride and Joy BBQ, which has an operating location in Miami, ... has so far invested $3.1 million in the space, including renovations, repairs and $600,000 in rent, according to court documents.

When fitting out the space, Pride and Joy BBQ discovered "almost too many structural deficiencies to count, and the extent of the problem was vast," according to legal documents.

The lawsuit lists issues such as termite infestation, deteriorating structural frames and a leaking roof and walls.

Pride and Joy BBQ recently stopped paying its rent while attempting to broker a deal on the repair costs with Suthon, which prompted Suthon to threaten to evict the restaurant, according to documents.

The lawsuit seems a little … weird.

As we wrote before, the space was seemingly ready for BBQ action, after crews previously gut-renovated away the former Bento Burger and Lucky Cheng's. There was even a preview event here with Mixon back in May… which prompted the one Yelp review, a four-star affair in which the author stated: "The pork belly mac and cheese was equally exquisite. I can imaging filling a large, clean tub with this delightful concoction and then diving in and eating my way out."

And what about the giant rotisserie that workers installed in early 2013? There was even a press event for it… (No one noticed "deteriorating structural frames" then?)

Despite the opening preview party, workers gutted the space down to nothing in the fall. If the restaurant was good to go last May, then why did the remaining partners decide to rip everything down to the bare walls and floor?

More alterations for the Pride and Joy space
Posted by Grieve at 5:00 AM

"This is how we do business in Miami, I don't know about you New Yawkers. We rent a space, we spend several million dollars to fit it out, and **THEN** we bring a structural engineer to make sure it meets our needs"

So Myron Mixon walks into Lucky Chengs, thinks he is getting one thing, falls in love with it, but when his initial excitement wears off and he gets to take a closer look in the cold light of day, he realizes it is something completely different? Sounds like a typical Saturday night at the old Lucky Chengs! Welcome to the party Myron!

Seriously? I'm not a business man but wouldn't it take years to turn a profit on a BBQ restaurant that you put 3 mil into just to open? Especially when Mighty Quinn's is already in the neighborhood

I hope they have some left for the lawsuits after people slip on the ice in front of that place. Proof you can be a shitty neighbor even before you move in.

Fools and their millions are soon parted. Did anyone tell these people they were renting a former gay bath house? I'm not happy about another Vegas or in this case Miami phony theme restaurant taking roost in the EV but I guess Times Square has run out of space.

Giovani trying to subvert EVG with his renegade blog,

Marty Wombacher's fuckin' hatred of the EV fuckin' winter (albeit, from afar),

Flaming Pablum's continuing exploitation of his kids as unpaid models,

Magic Hawk's insistence that he is an actual human being,

Jeremiah's VERY secret relationship with that 7-11 babe out in Montauk,

Schwimmer late, late night spottings as he continues to be flummoxed by "WHICH of these g'damned doors actually WORKS?",

The UNexplainable missing Topless Protests in the middle of February,


And what we got here folks is the brand new HBO afternoon serial program....

"AS THE EV TURNS"

(alternate title : the perennial favorite, "The EV Hung And The Breastless")

I hope the lawyers take every penny from both sides. The new team is a bunch of wackos, but Suthon deserves what she gets. Just a bad match from the start, and the owner should have seen that. A pox on both their house.

@DrBop -- Actually I'm planning to get funding from Ben Shaoul, Citibank and the Empire Biscuit boys in order to take over this feisty little blog and make it more "user friendly" while we quietly Gentrify, Watsonify and Sushify whatever is left of the place formerly known as the East Village, or as we like to call it, The RAP, which is short for The Ripoff Artists Paradise...

By the time they got it together the trend was over