Portraits of Iranian prisoners on display in Tompkins Square Park 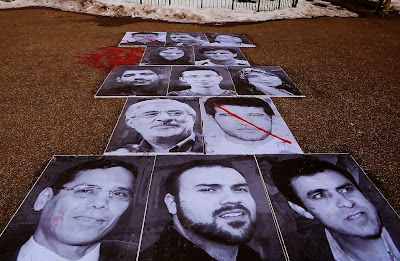 This was the scene in Tompkins Square Park this afternoon. And here's the official explanation of what was on display (via Facebook):

The Iran Human Rights Documentation center teamed up with the Inside Out Project, created by the Parisian street artist J R, in a pop-up protest against the incarceration of journalists, artists, feminists and other activists in Iran on the morning of February 18th outside the United Nations and at Tompkins Square Park on February 20th.

Like the J R project, in which large portraits of ordinary people are plastered on walls and sidewalks, the installation at the protest included portraits of 11 people who are currently imprisoned in Iran, and two who were recently executed. 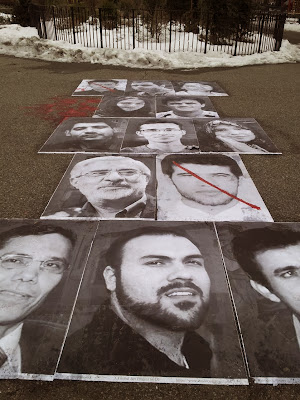 DNAinfo has the story from today here.
Posted by Grieve at 8:07 PM

CIA protestors. Plenty of our own political prisoners in the USA. It is obscene that Leonard Peltier is still imprisoned.

I agree with nygrump, Iranian expats don't have the empathy to come up with such a plan (or even want democracy in their homeland). It must be a CIA plan.

Do you sound incredibly racist? Huh.

Every time the Iranians or Syrians have a big rally up at the UN at Dag Hammerskold Plaza they have to bus in the same group of black church members from Harlem who don't speak Farsi or Arabic and have no idea what's going on, they just wave the flags when they are given when told to do so. Most Ex-pats are too busy to show up at their own rallys, sad but true.

Someone remind me, please, how well it worked out the last time we got involved in internal Iranian affairs.