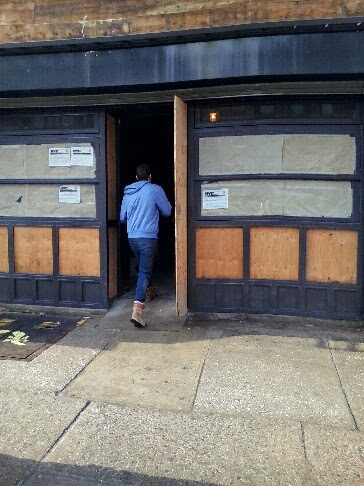 [Photo by Bill the Libertarian Anarchist]

Just taking a quick look at 107 First Ave. between East Sixth Street and East Seventh Street… where renovations continue for Huertas, a restaurant featuring "the cuisine of Northern Spain."

Born and raised in New York, Jonah Miller ... began spending his summers working in some of New York’s greatest kitchens when he was 14, beginning with two seasons at Chanterelle and then moving on to Gramercy Tavern and Savoy, among others. Most recently, Jonah was part of the opening team at Danny Meyer’s Maialino, where he spent three years.

After leaving Maialino, Jonah returned to Spain, where he had spent a semester during his Food Studies and Restaurant Management B.S. program at NYU. A month spent eating his way around northern Spain provided the finishing touches to the vision behind Huertas.

The restaurant is expected to open this spring. You can find a sample menu here.

This address was previously home to L'asso EV, the pizzeria that closed in July 2013.
Posted by Grieve at 5:00 AM

I know Jonah through a close friend that grew up with him in the city. He's a really nice and genuine guy and has dedicated his last few years to working on opening the restaurant. Cool to see him recognized on here (and given he's a native New Yorker, hopefully with less complaints than the other new restaurants are getting). I wish him luck and am looking forward to trying the food!

Looks like the link you guys posted to Jonah's bio is broken. Here is the correct link: http://huertasnyc.com/the-chef/

Jonah Miller is such a fantastic chef! I can't wait for this to open. A welcomed addition to the neighborhood for sure.